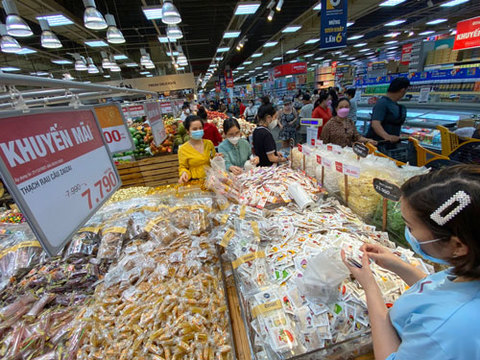 Businesses have earmarked nearly VND20 trillion (US$872.7 million) to stock goods, according to the city Department of Industry and Trade.

Thanks to this, prices would be steady for a month before and after Tet on February 1.

There will also be flash sales of essential goods such as pork, poultry and eggs a few days before the New Year.

Large retailers such as Saigon Co.op, SATRA, AEON - Citimart, and Big C plan to offer promotions with discounts of 5-49 per cent on thousands of items consumed during the holiday season.

Wholesale markets Binh Dien, Hoc Mon and Thu Duc and almost all traditional markets have reopened after being forced to close during COVID.

Chairwoman of the city Food and Foodstuff Association, Ly Kim Chi, said there would be no shortage of goods, including of speciality goods from various provinces and cities, during Tet.

Deputy general director of Vissan Company, Pham Van Dung, said 2,800 tonnes of fresh foods, up 4 per cent from last year, and 4,200 tonnes of processed foods, up 6 per cent, are in stock, enough to supply not just the city but the entire country during Tet.