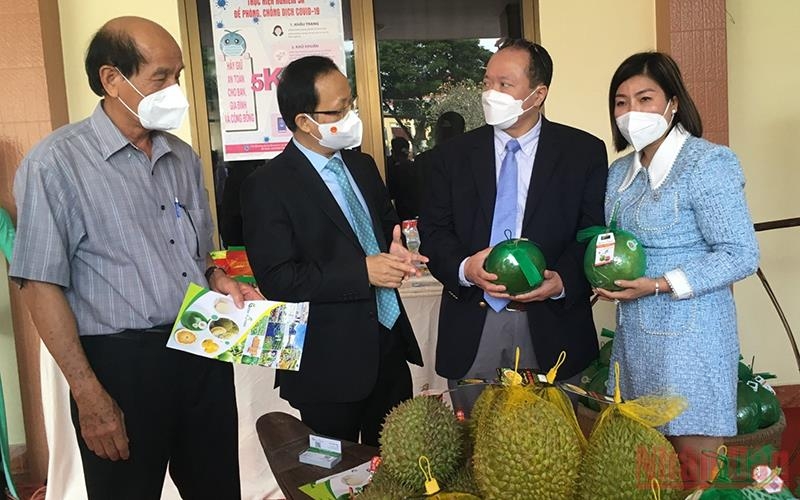 Delegates learn about the main products of Ben Tre province at the seminar. (Photo: NDO)

NDO - Deputy Foreign Minister Vu Quang Minh on January 3 led a delegation from the Ministry of Foreign Affairs to attend a seminar on investment, trade and tourism promotion between Ben Tre Province and Vietnamese foreign ambassadors.

The event offered an opportunity for Ben Tre and ambassadors to discuss the foreign policies of recent years as well as outline appropriate trade and investment promotion solutions for the future.

Enterprises of Ben Tre and ambassadors to foreign countries discussed about foreign markets, development potentials, and investment opportunities for the province's key products, such as coconut, seafood, and fruit.

Deputy Foreign Minister Vu Quang Minh affirmed that the Ministry of Foreign Affairs and Vietnamese representative missions abroad are committed to always accompany and support the international integration of Ben Tre Province. The ministry is also ready to coordinate with the province in organising investment promotion sessions and economic diplomatic activities with specific partners such as Japan, the Republic of Korea, the United States, and Australia.

He also appreciated the dynamism of the provincial leaders and the business community of Ben Tre Province in fostering production and promoting international economic integration.

Ben Tre has huge potential in key products such as coconuts, fruit trees, seedlings, ornamental flowers, and livestock, especially with it range of about 200 coconut products and handicrafts.

The province is known as the “Vietnamese coconut land” with an area of about 75,000ha and a total output of nearly 700,000 tonnes per year. Ben Tre currently has the highest concentration of organic coconut material area in the country, covering more than 12,000 ha.