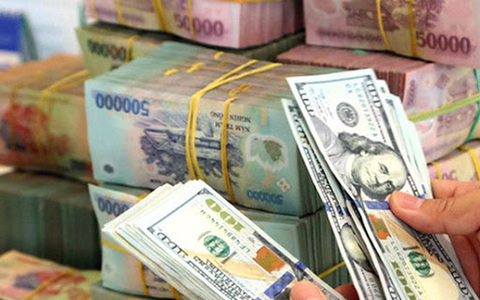 The move is aimed at maintaining good liquidity for commercial banks, helping them lend at low interest rates to support the economy.

This month alone, the State Treasury bought US$900 million from commercial banks. As the purchase was a spot transaction and the buying price was listed at VND22,650 per dollar, an equivalent of VND20.4 trillion was injected into the market.

Counting October and November, the State Treasury has so far bought a total volume of US$1.3 billion from commercial banks, meaning more than VND29 trillion was injected into the banking system. The injected value is large, and rarely seen in recent years.

Not only the State Treasury, but the SBV also bought large amounts of foreign currency many times in the second half of 2021, thereby injecting hundreds of billions of dong into the banking system.

According to data from the Saigon Securities Incorporation’s Research Division, in the first three weeks of November alone, the amount injected into the market through the SBV’s foreign currency buying channel was more than VND60 trillion.

Analysts from the Bao Viet Securities Company said the purchases of the State Bank of Viet Nam and the State Treasury of Viet Nam showed the Government’s goodwill in maintaining abundant market liquidity to support the economy.

The foreign currency purchases of the two agencies have helped commercial banks have a new capital source to maintain liquidity and stabilise interest rates.

Despite high capital demands as the country is entering the peak payment season at the end of the year, the interbank interest rate is currently being maintained at a relatively low level against that of 2020 and 2019.

According to experts, besides the liquidity support for the banking system, State agencies can also take advantage to buy the dollar at this time, when the buying price of the greenback has hit its lowest since 2018, to build up the nation’s foreign currency reserves.

SBV’s deputy governor Pham Thanh Ha said the SBV had bought nearly US$25 billion in the past two years. It means an equivalent amount of VND was injected into the economy. The value has helped maintain good liquidity for banks to help them lend at low interest rates compared to previous years.

Experts forecast that in the context of inflation at a low rate, the Government will continue to maintain loose monetary and fiscal policy, such as reducing interest rates and increasing credit growth quotas, to support the recovery of the economy after the pandemic.