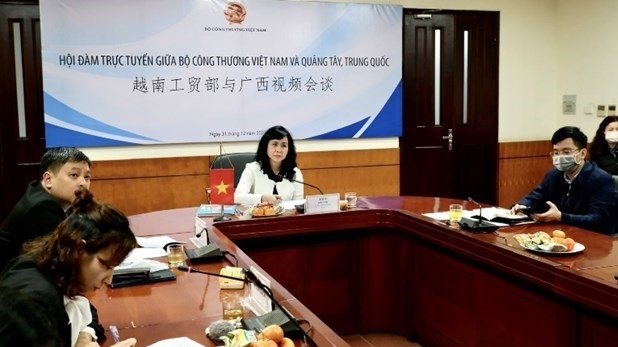 The cargo congestion was debated during the online talks held on December 31. (Photo: VNA)

The cargo congestion was debated during the online talks between the Asia - Africa Market Department under the Vietnamese Ministry of Industry and Trade (MoIT), authorities of the northern border provinces of Lang Son, Quang Ninh and Cao Bang, and Guangxi province’s Department of Commerce.

The MoIT said COVID-19 prevention and control measures currently imposed by Guangxi like suspending the operations of border gates or the import of certain fruits have disrupted the supply chain, adversely impacted the bilateral trade and caused great losses to businesses and people of both sides.

The ministry also urged Guangxi to provide updates on the operations of border gates in the province, while coordinating to review and complete goods delivery process in line with pandemic prevention and control regulations.

In reply, the Chinese side called on Vietnam to join hands in the pandemic combat at border gates, and exchange information about the management of border gates and traffic routes.

For the proposals raised by the Vietnamese side, the Guangxi Department of Commerce said it will report them to competent agencies.