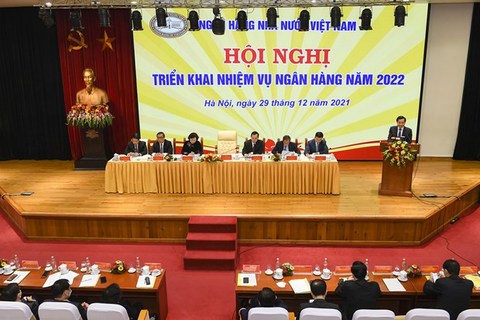 During a conference of the banking industry in Ha Noi on Wednesday, Khai said the State Bank of Vietnam (SBV) needs to further reduce lending interest rates, especially for priority industries and sectors, besides improving credit quality and boosting up lending to production, business and infrastructure projects.

It is also necessary to promote the development of consumer finance to contribute to reducing loan sharks and crimes on lending apps, he said.

Besides, the SBV must closely direct banks to have plans and solutions to handle and keep their bad debt ratios of the banking system under control, which will help ensure the banking system operates safely, healthily and sustainably, Khai noted.

According to the SBV’s deputy governor Dao Minh Tu, the spread of the Omicron variant has caused difficulty to forecast the global economic outlook and inflation in 2022, thereby posing many challenges for the Vietnamese banking industry.

Therefore, Tu forecast, the SBV’s monetary policy management next year will be greatly influenced by inflationary pressure, especially in the context that a loose monetary policy has lasted for the past few years.

The banking industry next year will also suffer a stronger impact on rising risks of debt recovery. If including debts, which had repayment terms restructured or interest rates reduced according to the SBV’s Circular 01/2020/TT-NHNN, the bad debt ratio of the banking system is about 7.31 per cent to date, Tu said.

He was also concerned if there is no timely and effective support from fiscal policy, an excessive expansion of credit size and preferential interest rate programmes can cause difficulties not only for the SBV’s monetary policy management but also the country’s strategy on improving the financial strength of banks.

Current policies on restructuring and delaying the debt payment time are a temporary and necessary solution in the short term, but extending the restructuring time will be risky for the banking system in the medium term, Tu explained, adding the implementation of many credit packages with different preferential interest rates will also distort the interest rate and credit markets.

As for the capital hike of banks, Tu said it is necessary to increase charter capital for State-owned banks to help them have enough capital to implement the Government’s many preferential credit programmes; lend to large and national key infrastructure projects in electricity, build-operate-transfer (BOT), transport, airports and, seaports; or increase loans for the Government’s priority fields such as agriculture and rural areas, import-export, small and medium-sized enterprises.

At the conference, chairman of the Joint Stock Commercial Bank for Investment and Development of Vietnam (BIDV) Phan Duc Tu also suggested relevant authorities to create conditions for banks to increase their charter capital and raise the capital adequacy ratio.