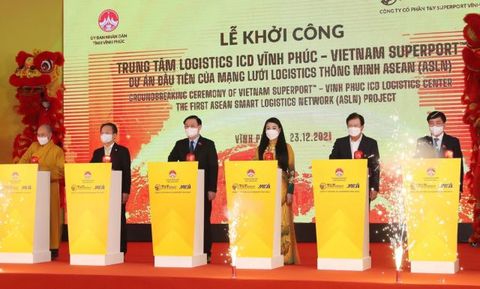 The ground-breaking ceremony of the project was attended by the National Assembly Chairman Vuong Dinh Hue.

pning 83ha in Huong Canh Township and Son Loi Commune in Binh Xuyen District, the centre has a designed customs clearance capacity of some 530,000 TEUs per year. The investor of the project is the T&Y Superport Vinh Phuc Joint Stock company, a consortium of the T&T Group and its Singaporean partners – the YCH Group and YCH Holdings Company.

As part of a detailed plan for the development of Viet Nam's inland port and logistics centre system in 2020, with a vision to 2030, the centre integrates the functions of a distribution centre and an inland container depot. Its first phase is planned to be put into operation in the third quarter of 2022 and Phase 2 in the fourth quarter of 2024.

This will be one of the largest logistics hubs in northern Viet Nam, linking industrial zones by road and rail as well as connecting to Ha Noi, the Hai Phong International Airport, and China’s Yunnan province, emphasised a representative of T&T Group.

The centre is expected to pave the way for a breakthrough in Viet Nam's logistics, towards the goal of cutting logistics cost to about 16–20 per cent of the GDP and raising the ratio of the sector's contribution to the GDP to 5–6 per cent by 2025.

According to the World Bank’s 2020 data, logistics cost in Viet Nam accounted for about 20.9-25 per cent GDP. Meanwhile, the figures for Thailand, Malaysia, and Singapore were 19 per cent, 13 per cent, and 8 per cent, respectively.

Also at the ceremony, the T&T Group presented Vinh Phuc with 100,000 COVID-19 rapid test kits worth VND5 billion as a donation to the local pandemic response.