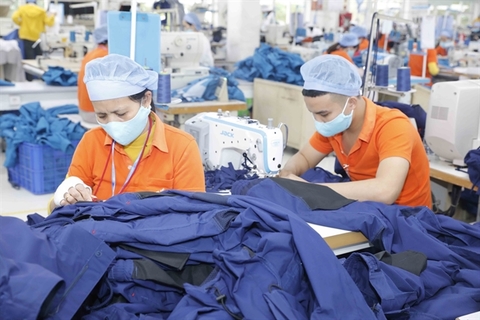 Minister of Industry and Trade Nguyen Hong Dien made the statement at the Viet Nam-RoK business seminar that took place in Seoul, South Korea on Wednesday.

The event was held by the Vietnamese Ministry of Industry and Trade, in collaboration with the Republic of Korea (RoK)’s Ministry of Trade, Industry and Energy and the Korea Trade-Investment Promotion Agency (KOTRA).

Dien said that since the establishment of their diplomatic ties in 1992, Viet Nam and the RoK have enjoyed the best-ever development stage of their relations. The RoK is Viet Nam’s third biggest trade partner and largest investor with over 9,000 projects.

He said that Korean groups and businesses have made important contributions to boosting export growth and trade surplus of Viet Nam.

Chang Sang-hyun from KOTRA said that Viet Nam is one of the important destinations of Korean investors.

An increase of Korean investment in Viet Nam amid the complicated developments of the COVID-19 pandemic has shown their trust in the country’s business and investment environment, he stressed.

At the event, RoK enterprises proposed the Vietnamese Government and Ministry of Industry and Trade help untie difficulties in entry and ground clearance, and create more favourable conditions for them, especially in the fields of energy, chemicals and textile and dyeing.

They expressed their confidence in Viet Nam’s potential and development, hoping to expand their investment in the future.

Meanwhile, Vietnamese firms showed their hope to strengthen cooperation with Korean partners in clean energy, recycling materials and chemicals, and get engaged in their production chains in the field of support industries.

Concluding the seminar, Minister Dien said that the Vietnamese Government and the Ministry of Industry and Trade have consistently supported and created favourable conditions for domestic and foreign investors, including those from the RoK, to continue expanding their investment and business activities in Viet Nam as well as supporting Vietnamese firms to deepen cooperation with Korean partners.

RoK is the largest investor in the textile - garment and leather - footwear industries of Viet Nam, which holds considerable chances to boost the export of these commodities to the Northeast Asian market.

During the webinar and online business matching on connecting Viet Nam - Korea businesses in the fields of textile, leather and shoes held in Ha Noi on Tuesday, Deputy Director of the Viet Nam Trade Promotion Agency Le Hoang Tai said the RoK is currently one of the leading economic partners of Viet Nam, ranking first in foreign direct investment and third in trade with the latter last year.

Viet Nam shipped $26.9 billion worth of textile - garment and $14.24 billion worth of leather - footwear products to the RoK during the period. The full-year figures are forecast to hit $33.9 billion and $18.52 billion, respectively, according to Tai.

Kyoung Don Kim, head of the investment promotion division at the KOTRA Office in Ha Noi, noted his country is the biggest investor in the textile - garment industry in Viet Nam, which in turn is the second trade partner of the RoK in this sector.

Vice Chairman of the Viet Nam Textile & Apparel Association (VITAS) Truong Van Cam expressed his hope that the RoK will invest more in the local industry, especially in material production and design, so as to benefit from preferential treatment under free trade agreements.

For her part, Phan Thi Thanh Xuan, Vice Chairwoman and Secretary General of the Viet Nam Leather, Footwear and Handbag Association (LEFASO), said the country is the second biggest exporter of leather - footwear products in the world, with about $20 billion in revenue, following China. There are nearly 2,000 enterprises in this sector, and they engage in all production steps. Meanwhile, the RoK is one of the five main export markets of this industry.

Given this, Vietnamese businesses have relatively big opportunities to cooperate with Korean importers to boost exports, she added.