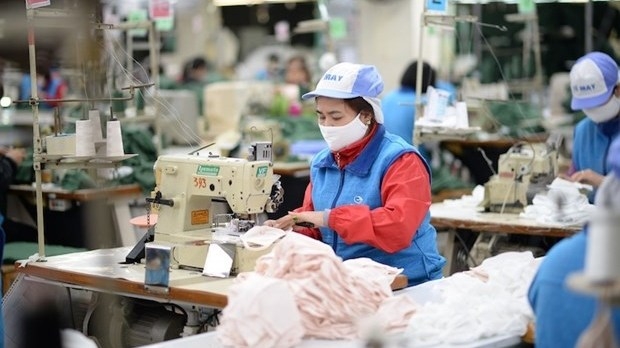 33% of the respondents are planning to recruit more workers to serve production and business in Vietnam. (Photo: moit.gov.vn)

NDO/VNA – As many as 55 percent of surveyed German enterprises in Vietnam expressed their confidence in positive development next year, according to the AHK World Business Outlook 2021 released by the Delegate of German Commerce and Industry in Vietnam.

Although the rate of German firms that are optimistic about Vietnam's economic recovery was 33%, lower than the figure at the beginning of this year, 55% of German firms expected their positive development in 2022.

Travel restrictions and issues relating to supply chains and logistics were major challenges to German companies’ growth, according to the report.

The AHK World Business Outlook is an annual survey conducted by the German Chambers of Commerce and Industry Abroad with the participation of German enterprises and investors overseas. This year, it received feedback from more than 3,200 German companies and subsidiaries worldwide, including Vietnam.

A survey released by the DIHK on May 12 showed that 66% of respondents said Vietnam’s economy will see significant improvements this year, as compared with only 46% recorded last year.

One third of them held that the economy will recover in the first half of this year, and 30% believed that the recovery will begin in 2022. More than half of the firms said their business in Vietnam is running smoothly, while only 11% have experienced lower revenue.

Besides, 47% of the enterprises intend to expand their business in the country and half of them will recruit more employees in 2021 and 2022. Notably, 67% expect to diversify their supply chains by seeking new suppliers, change logistics goods transportation routes or increase their stockpile.

However, the survey pointed out that a shortage of skilled labourers and declining consumption have remained the biggest challenges for German firms in Vietnam, with up to 42% of them saying they are meeting difficulties in employing high quality personnel, up from 18% last year.

Other issues regarding economic policy, financial approach, legal safety and infrastructure, plus border closure, consumption decline and the cancellation of exhibitions and trade events due to COVID-19 have also significantly affected their business.