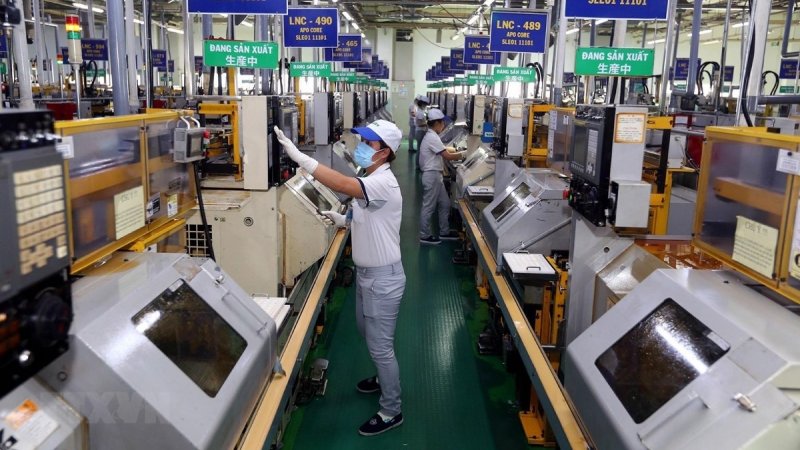 NDO/VNA - Export companies in Ho Chi Minh City are recovering well following the lifting of COVID-19 restrictions as workers from other provinces gradually return to work.

It has orders from the US for until April next year, he said.

Chu Tien Dung, the HCM City Union of Business Associations chairman, said companies have worked with their employees and partners to speed up production to fulfil order backlogs and accept new orders.

“Walking around the factories, we realised that the city's decision to ‘live with the pandemic’ has proven effective.”

For instance, a company that used to stop production when workers were found infected, has in the past 15 days found 20 infections, but, with support from authorities, disinfected the factory, sent the infected workers to medical facilities for treatment and continued production, he said.

According to the HCM City Export Processing Zone and Industrial Park Authority (HEPZA), nearly 216,000 out of 288,000 workers at industrial parks and export processing zones have returned to work, and many of the companies are operating at 95 percent capacity.

Companies in labour-intensive sectors such as textile and garment and footwear are now basically back to normal.

Dr Tran Du Lich, a member of the National Assembly Economic Committee, said for companies to get up to speed needs Government financial support and simplification of procedures for them to access the funding.

The HCM City Department of Industry and Trade said it would offer a credit support package worth VND70 trillion (US$3.07 billion) this year to help businesses access preferential loans and resume production.

Nguyen Hoang Minh, its deputy director, said his office took measures to mitigate the difficulties faced by businesses in line with directions from the central bank and the city People’s Committee.

Demand for funds increases normally at the end of the year, but there would be no shortage, he assured.

The banking industry is committed to ensuring sufficient loans at preferential interest rates to help businesses revive production and trading, he said.

The industry has become a reliable partner for businesses, implementing a number of policies to enable them to overcome difficulties caused by the pandemic, including debt restructuring, waiver and reduction of interest and fees and preferential loans to supporting industries and those that use technology, he added.