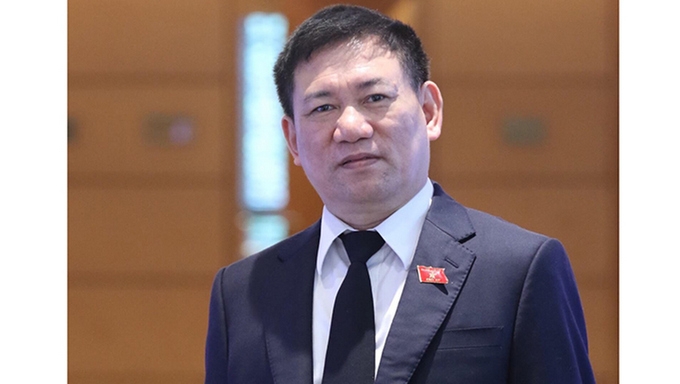 NDO – The COVID-19 pandemic situation nationwide has seen positive changes since September; as such, many localities have adjusted the epidemic prevention and control measures and are gradually easing social distancing rules suitable with the risk level of each area towards establishing a "new normal", facilitating socio-economic recovery and stabilising the people’s lives.

Also in the new normal, the state budget balance work has reported flexible changes in accordance with the reality of the country’s economy. Member of Party Central Committee and Minister of Finance Ho Duc Phoc granted an interview with Nhan Dan (People’s) Newspaper to talk more about this issue.

Q: How do you assess the state budget revenue and expenditures in 2021, Minister?

A: As we all know, the country has been facing the fourth outbreak of COVID-19 pandemic with Delta variant which has spread more rapidly, dangerously and widely since mid-2021. Many localities, including key economic areas such as Ho Chi Minh City, Dong Nai, Binh Duong and Hanoi, were forced to apply social distancing measures. As a result, economic activities and the people’s lives have been severely affected, causing negative impacts on state budget revenue and expenditures.

Amidst the difficulties for enterprises and people, the Ministry of Finance has proactively proposed the flexible adjustment of the fiscal policy, the exemption and reduction of many taxes, fees, charges, land use and rent levies (with a total value of around VND140 trillion in 2021). The necessary resources have been prioritised for the epidemic prevention and control and ensuring social welfare for people (total around VND26 trillion). The donations were also mobilised from numerous organisations and individuals in the country abroad for the fight against the pandemic, towards restoring the new normal state in the localities and creating favourable conditions for enterprises to resume their operations in order to avoid the disruption of supply chains.

Due to the impacts of the epidemic and the implementation of policies related to the exemption, reduction, and extension of taxes, fees, charges and land rent for businesses and people, state budget revenue has faced many difficulties in recent months. The state budget revenue was estimated at VND65.2 trillion in September, of which VND49 trillion is from domestic revenue, a sharp decrease of around VND17 trillion compared to August. However, thanks to the high revenue in the first and second quarters and some unexpected receipts from commercial banks, securities companies and real estate transfers, the total state budget revenue in the first nine months of this year still reached 80.2% of the estimate. Of this figure, domestic revenue is estimated at 77% of the estimate (a year-on-year increase of 5.9%); sources from crude oil are expected to reach 125.4% (up 5.2%); and the figure from import and export activities may reach 98.2% of estimate (up 30.3%).

The total budget spending was projected at 61.1% of target in the first nine months. In particular, the expenditure for development investment was equivalent to 45.8% of estimate decided by the National Assembly; interest payment was at 72.1%; and recurrent expenditures reached 70%. The above data shows that the budget spending in the first nine months was carried out in accordance with the estimate and the performance progress of the professional tasks at budget-using units.

The spending schedule was lower than the budget revenues, so overall, the nine-month state budget balance recorded a surplus in the first nine months of this year. However, the central budget balance had an overspending, while the local budget witnessed a large surplus. However, the Ministry of Finance has proactively conducted the issuance of government bonds to effectively use the state budget while ensuring payment sources to promptly pay due principals contribute to orienting the development of the market and restructuring public debt. As of the end of September, VND237.7 trillion worth of government bonds have been issued, with an average maturity of 13.21 years and average interest rate of 2.26% per year.

Q: Thus, we are assured that the budget has fully met the goals set out since the beginning of the year and the state budget balance has been managed by the Finance Ministry in a flexible and effective manner. Could you share more about the budget for epidemic prevention and control and the Government’s debt repayment obligation?

The Prime Minister has recently decided to allow the Ministry of Health to use VND1.237 trillion from the budget source of 2020 as well as spend an additional VND2.75 trillion from the COVID-19 Vaccine Fund to purchase vaccines. Cumulatively, a total of VND15.53 trillion has been decided for purchasing vaccines to date, including nearly VND8 trillion from the COVID-19 Vaccine Fund. In addition, the PM and Ministry of Finance have decided to provide over 152,000 tonnes of rice and supplies and equipment from the national reserve for epidemic prevention and control, disaster recovery and relief for people during the Tet holiday and between-crop period at the beginning of the year.

Although the state budget balance has faced difficulties due to the impact of the COVID-19 pandemic, the Government has synchronously and flexibly implemented appropriate management solutions on fiscal policy to ensure the balance of the state budget, the adequate financial resources for the payment of debts in full and on time as committed and assigned in the 2021 estimate. We can also ensure expenditures for investment tasks, recurrent expenditure according to estimates, the implementation of social security policies, security and defence missions.

The state budget overspending is expected not to exceed 4% of GDP decided by the National Assembly and the ratio of public debt to GDP will stand at 42-43% of GDP. The Government's total debt repayment obligation is to be limited at about 25% of total state budget revenue, as a safety limit. The guarantee of state budget revenues and expenditures will contribute to ensuring the national credit rating and we are all very proud that Vietnam was the only country in the world to be retained sovereign credit rating and improved its economic outlook to "positive" from "stable" by three credit rating agencies including Moody’s, S&P and Fitch.

Q: Will the Ministry of Finance propose a plan on issuance of government bonds or public bonds to the Government in the context of many difficulties in State budget balance?

A: The Government has assigned the Ministry of Planning and Investment to develop a programme to support the economic recovery and development and submit it to competent authorities for consideration and decision. Based on the approved programme and the annual total state budget loans approved by the National Assembly, a plan on borrowing and repayment of public debts, consisting of domestic and foreign loans, will be submitted to the Prime Minister for his approval. Recently, the Ministry of Finance has focused on mobilising domestic capital through government bond auctions on the market. The volume of issued government bonds accounted for nearly 90% of the total domestic loans of the Government during the 2016-2020 period. Thereby, the risk of dependence on foreign loans was reduced to a minimum, contributing to improving the safety and sustainability of the public debt portfolio.

According to the provisions of the Law on Public Debt Management, the national construction bond is also a type of government bonds to mobilise capital from the people for the investment in the construction of important national projects and other essential ones. We all know that the capital demand for development investment during the 2021-2025 period is very large. The Ministry of Finance will continue to focus on mobilising domestic capital through the auction channel for the issuance of government bonds on the market in the coming time. In addition, the ministry will continue to study and propose other forms of capital mobilisation as prescribed by law with reasonable and effective costs to the Government, towards mobilising resources in the economy for development investment.