At 9:50 am on Friday (Vietnam time), Bamboo Airways made its historic landing at the San Francisco International Airport, marking the Vietnamese airlines’ first Vietnam-US non-stop flight.

“The first non-stop flight between Vietnam and the US was as long as it took Vietnamese aviation to make this dream come true, but also as fast as the blink of an eye, bringing ‘Quy Nhon City’ halfway around the world to the other side of the hemisphere, connecting the two lands which are thousands of miles apart,” wrote on its official Facebook page.

SFO also posted a welcome message for Bamboo Airways on its social media channel. “Welcome Bamboo Airways! After a nearly 14-hour flight, Bamboo Airways landed at SFO this evening for their first flight from Vietnam to the United States. This was a Special Authorization Flight.”

The flight is the first of 12 two-way direct flights between Vietnam and the US approved by the Transportation Security Administration. Vietnam-US flights will take off and land in different airports of Vietnam - Noi Bai Airport in Hanoi and Danang International Airport) and the US (San Francisco and Los Angeles airports in California, and Seattle-Tacoma airport in Washington).

Aside from the historic flight, Bamboo Airways also recently announced several big moves to further strengthen its presence in the aviation industry. On September 21, the airline officially introduced Aviaworld (AVIAREPS JV) as its official general sales agent in the US. It’s also working on a series of activities such as signing cooperation agreements with San Francisco International Airport and Los Angeles International Airport, opening its representative office in the US, working with Boeing aircraft manufacturer, signing with CFM International, signing a $2 billion deal with GE Aviation.

The airline is also actively promoting activities to expand the international flight network and open more routes to Australia, the UK and Germany by Boeing 787-9 Dreamliner. 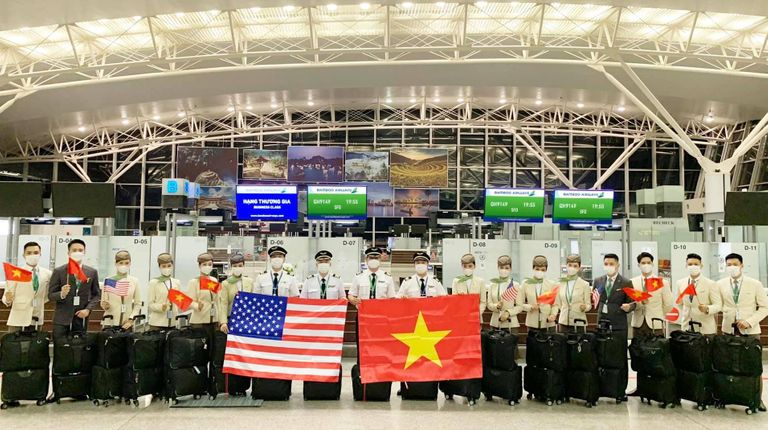 A milestone for Vietnam’s aviation industry

Bamboo Airways’ maiden flight to the US is an important milestone for the private airline, as it endeavors to create a non-stop, seamless journey for travelers from both countries.

“Nonstop flight network connecting the two countries is of great potential as there are more than two million Vietnamese diasporas living, working, and studying in the US, leading to the increasing travel demands for trade and exportation. The US is a leading country in the economy and tourism industry with the top number of visitors to Southeast Asia, including Vietnam for many years,” read a press release from the airline.

“Bamboo Airways believes this is the right time to promote built-in conditions and take new steps to effectively develop this important route.”

What Bamboo Airways has achieved promises higher skies for the whole aviation industry in Vietnam. With the complexity of acquiring various safety certifications and authorizations, operating direct flights to the US is a real challenge most airlines would find impossible to overcome.

Aviation experts say that the Transportation Security Administration is one of the toughest obstacles with its stringent requirements. To prove an airline’s capability to conduct long direct flights, it will send experts to examine Vietnamese airports before proceeding further.

"We will once again affirm the capability for operation, safety, security and infrastructure for Vietnamese airlines and the entire Vietnamese aviation industry in general, Nguyen Manh Quan, deputy general director of Bamboo Airways, told local media. He reiterated that yesterday’s flight was a historic one, not just for Bamboo Airways, but for Vietnam’s thriving aviation sector.

The private airline also sees this as one big leap towards the recovery of the aviation and tourism industries —  both have been critically trampled by the COVID-19 pandemic since last year.

Bamboo Airways, Vietnam Airlines and Vietjet Air are all working with the International Air Transport Association to trial the IATA Travel Pass. This digital health pass will bear passengers’ COVID-19 test results as well as vaccination certificates. This is considered to be the safest and most effective way to resume international travel, especially to and from countries with high vaccination rates.

All crew in the QH9149 flight all held vaccine passports issued by IATA. Bamboo Airways said it will implement the use of vaccine passports when it starts regular commercial flights to the US within the year or in early 2022.

Vietnam welcomed its first vaccine passport holders at the Van Don International Airport in Quang Ninh. All 297 passengers were Vietnamese nationals repatriated from Japan. They were quarantined for seven days, despite being fully vaccinated.