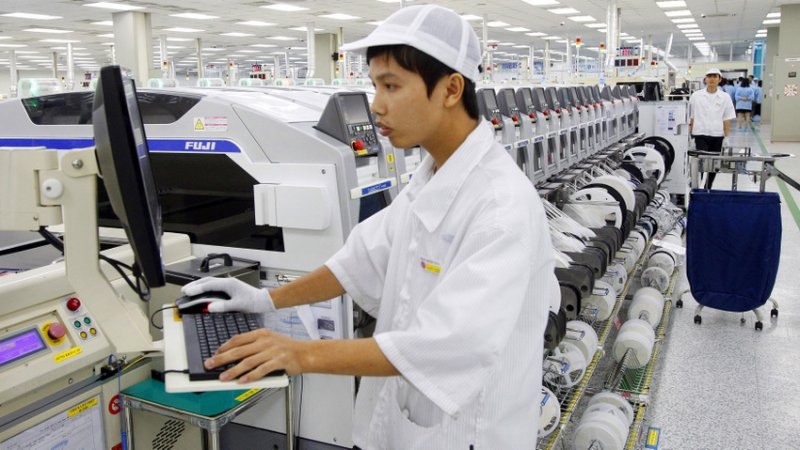 Samsung is the largest ROK investor in Vietnam

NDO - In spite of Vietnam’s prolonged trade deficit with the Republic of Korea (ROK), it is still no big concern as the Northeastern Asian economy aims to swell its investment and exports to its strategic partner for production and re-exports.

During a recent visit by Prime Minister Pham Minh Chinh to Samsung Electronics Vietnam Thai Nguyen (SEVT) to learn about the firm’s performance in the face of COVID-19 pandemic, Choi Joo Ho, president of Samsung Vietnam said that Samsung has been seriously affected by the outbreak, especially as many workers in the company are yet to be vaccinated.

Local media reported that four major subsidiaries of Samsung in Vietnam earned a combined revenue of US$63.25 billion in 2020, down 4% year-on-year, resulting in a profit of US$3.8 billion. This was also lower than the US$4.3 billion recorded in 2019, marking a decline for the second year in a row.

The media cited Samsung’s statistics as stating that around 50% of the group’s smartphones and tablets are produced in Vietnam and exported to 128 countries and territories, including the US, Europe, Russia and Southeast Asia.

Ho said that Samsung has invested more than US$17.7 billion in Vietnam so far, with its export value exceeding US$56 billion last year.

Samsung’s factories are located in Bac Ninh and Bac Giang provinces have weathered difficulties thanks to effective management of COVID-19 outbreaks there, while the factory in Thai Nguyen has resumed normal operations, with not one COVID-19 infection case recorded.

In Vietnam, Samsung is leading the country’s export of electronics items which comprise of mobile phones, laptops, and others.

According to the Ministry of Industry and Trade (MoIT), in the first eight months of 2021, the Southeast Asian economy raked in US$35.7 billion from exporting mobile phones and spare parts, accounting for 16.8% of Vietnam’s total export turnover and up 13% year-on-year. Vietnam also earned US$31.3 billion, up 12.8% year-on-year, from exporting laptops, spare parts and other electronic items.

However, experts say that not only increasing exports, ROK companies in Vietnam, and many other Vietnamese and foreign enterprises, have also raised imports worth dozens of billions of US dollars into Vietnam despite the COVID-19 pandemic. This has caused the trade deficit between the two countries.

Thus, in the first eight months of this year, Vietnam witnessed a trade deficit of US$20.7 billion with the ROK.

However, the Korea Chamber of Business in Vietnam (KorCham) said Vietnam should not be anxious about such a deficit as many Korean businesses have been increasing their imports of machinery, equipment and materials into Vietnam in order to serve production projects here, and then exporting their made-in-Vietnam products to the ROK and other foreign markets.

For example, in the case of Samsung, in order to reap its impressive export turnover of more than US$56 billion last year, the group also had to use a huge amount of money (several dozens of billions of US dollars) to import materials and equipment from, because Vietnam remains weak in its supporting industries.

Prime Minister Pham Minh Chinh has also suggested that Samsung should have solutions to increase the number of domestic suppliers and the rate of localised machinery, equipment, and materials, as well as raise the added value of Vietnam in the group’s products and export turnover under the principle of more harmonised mutual benefit.

According to the General Statistics Office, the products imported from the ROK are mostly machinery, equipment and materials in the service of production in Vietnam, not for direct consumption here.

Under the commitments of the ASEAN-Korea Free Trade Agreement and the Vietnam-Korea Free Trade Agreement (VKFTA), over the past few years, as much as 80% of import tariffs between Vietnam and the ROK have been removed. Specifically, under the KVFTA, which was inked and entered into force six years ago, since 2018, more than 90% of import tariff lines have been reduced to 0%. What is more, Vietnam is commited to completely phasing out its import duties on nearly 90% of all products from the ROK within a period of 15 years since the deal took effect in 2015.

Tariff reduction and elimination by the ROK are expected to offer new opportunities for the export of Vietnam’s important export-categories such as agro-products, pivotal aqua-products of shrimp, fish, tropical fruits, industrial products of garment, mechanical instruments. The ROK also commits to granting market access in service and investment and agreed to promote economic cooperation, technical support in diversified sectors. The ROK, for the first time, is opening its market for products such as garlic, ginger, honey, shrimp, offering considerable opportunities for Vietnam to enter into competition with other suppliers from the region.

Meanwhile, Vietnam commits to offering concession for the ROK in certain categories of industrial products such as garment materials and accessories, plastic materials, electronic accessories, trucks and cars having a capacity of 2,500cc and more, car-parts, electrical home appliances, steel products, and cables.

As of August 20, 2021, the ROK was Vietnam’s biggest foreign investor, with total registered capital of US$72.34 billion, across 9,159 valid projects.

Nearly two months ago, Prime Minister Pham Minh Chinh had a phone call with Korean counterpart Kim Boo Kyum to discuss specific solutions to enhance the two countries’s bilateral strategic partnership. They agreed on achieving the goal of increasing the bilateral trade turnover to US$100 billion in a balanced trade manner, including the facilitation of Vietnam’s main exports like agro-forestry-fishery products and seasonal fruits.

Vietnam also promised to continue offering favourable conditions to Korean firms to implement their plans on expanding business and investment activities in the country.

KorCham’s vice chairman Hong Sun said that Korean businesses are rating Vietnam as a good investment and business destination. However, prolonged social distancing in many localities are driving Korean companies and investors into difficulty.

“They need more support from the state as soon as possible,” Sun said. “We believe that Vietnam will soon be successful in curbing the expansion of the pandemic.”