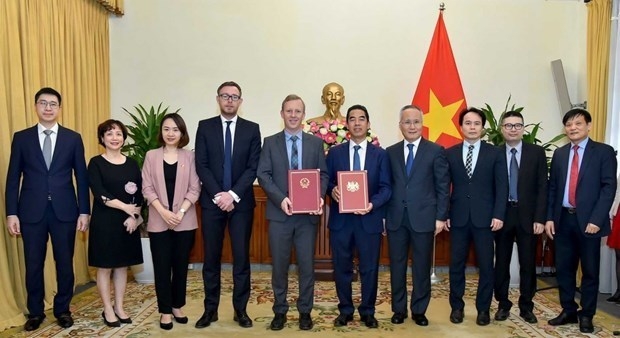 NDO/VNA – The General Department of Vietnam Customs has issued documents to guide the customs departments of provinces and cities to effectively enforce the UK-Vietnam Free Trade Agreement (UKVFTA) and related documents.

The Prime Minister has designated the general department as the coordinator for the implementation of the agreement’s Chapter IV - Customs and trade facilitation.

The customs authority is also assigned to join the Customs Committee, and be responsible for answering information related to customs and trade facilitation.

The UKVFTA was officially signed on December 29, 2020 and became effective on May 1, 2021. The agreement is expected to help Vietnam and the UK maintain preferential trade conditions and economic benefits through the market opening commitments already in the EU-Vietnam Free Trade Agreement (EVFTA).

In order to carry out the UKVFTA, the Prime Minister issued a decision on May 18, 2021 approving a plan to implement the agreement, tasking the Ministry of Finance, specifically the General Department of Vietnam Customs, to build a decree on Vietnam’s preferential export tariffs and special preferential import tariffs for the 2021-2022 period to implement the UKVFTA.

The decree was approved by the Government on May 21 and officially took effect from the date of approval.

According to economists, the UKVFTA will help reduce import tax on goods imported from the UK into Vietnam. This agreement is also expected to maintain the momentum of promoting trade and investment relations of the two sides in the coming years.