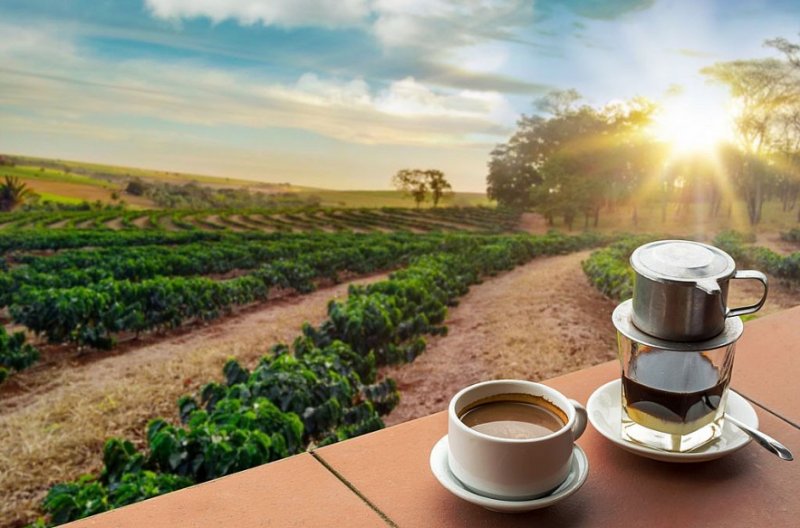 Coffee is one of the most consumed commercial crops and is dear to all. It is also believed that this coffee has the power or potential to make our brains stress free.So this is the reason why most of the office working people have coffee.This is because of the drug that is present in the coffee that is caffeine.This drug has the ability not only to make us stress free but also it makes us get addicted to this coffee. It is the one thing that most of us rely on to boost our day. Here are the top ten largest coffee producing countries in the world. 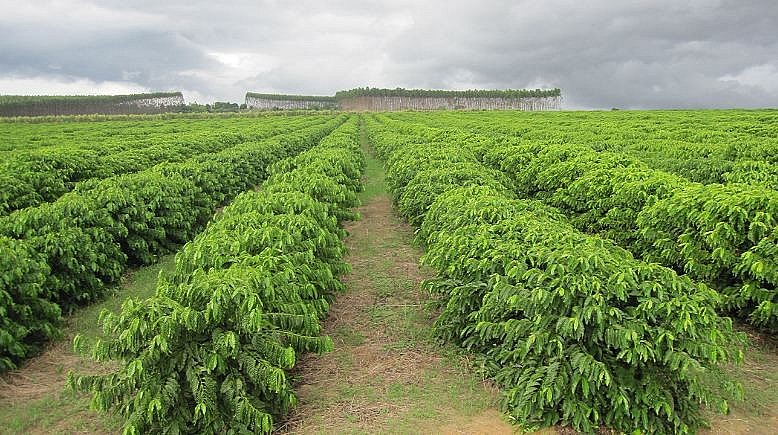 Brazil is one of the top coffee-producing nations in the world. In 2016, it produced about 2,594,100,000 kilograms of coffee beans. It is has been the largest producer for about 150 years. The majority of the coffee plantations are located in Minas Gerais, Sao Paulo, and Parana, three south eastern states where the climate and temperature are ideal for coffee production. Brazilian coffee is processed by a technique called as dry process where the beans are dried rather than the wet process.

In this list of top ten largest coffee producing countries in the world 2019 we see that Coffee is definitely the nectar from the gods. Whether it is a basic blend or a rich cappuccino coffee lovers will adore coffee any time of the day. 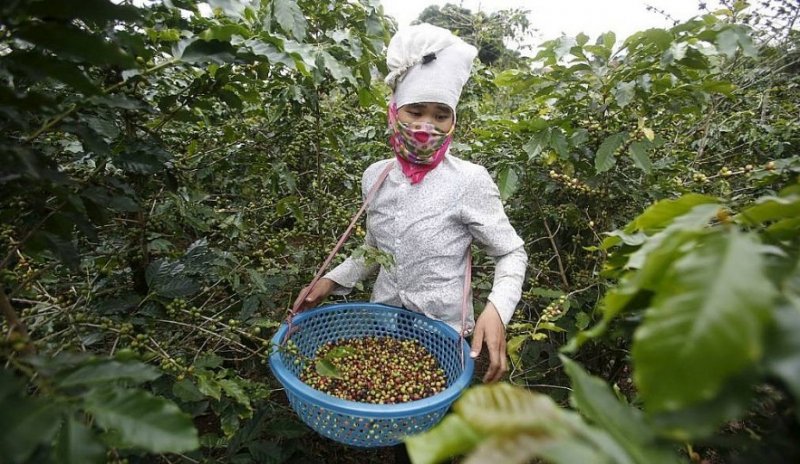 Vietnam produced about 1,650,000,000 kilograms of coffee beans 2016.The most famous drink of this place is coffee with condensed milk. Even though there was a huge economic blow during the war their chief exporter was rice as there was a rapid expansion in coffee production about 6,000 tons earlier and 2 million has moved this country to second place.

Coffee is more than just a drink in Vietnam; it’s a way of life. Cities and towns would be all but empty without the multitude of cafes that line the streets. Coffee can be found down every alleyway and around every corner, from highly stylised shops to simple roadside stands. It’s about more than just a quick energy boost; it’s an excuse to sit, relax and bond with friends. From morning to night, Vietnamese people flock to cafes to chat, relax and enjoy a cold glass of ca phe sua da. 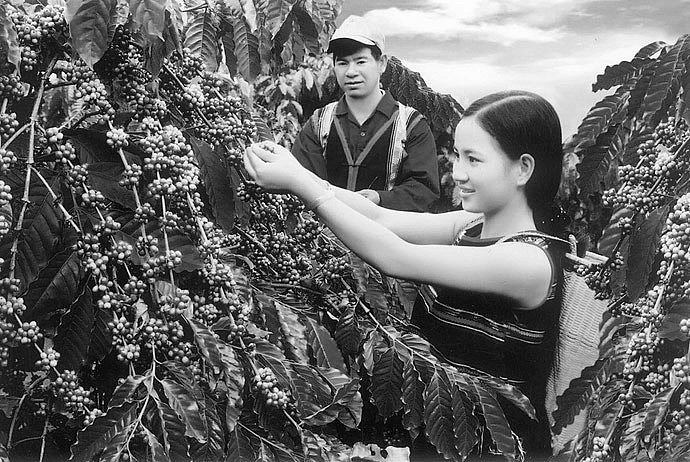 For many years, Vietnamese cafes were a fairly rustic affair, with limited decoration and small plastic stools or hammocks as seating. However, as the coffee industry took off in the late 90s, more sophisticated establishments began to appear. Popular coffee chain Trung Nguyen opened its doors in Saigon in 1998 and Starbucks-inspired Highlands Coffee followed suit in 2002. As time went on, an increasing number of independent, stylised cafes appeared, thanks in part to the cultural clout of South Korea, where themed coffee shops are all the rage. 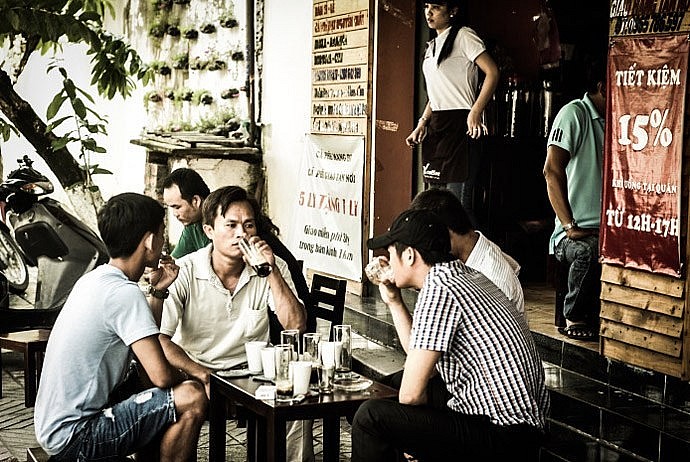 These cafes are more than just a place to score a quick energy burst. “We don’t drink coffee on the go,” says Minh, who lives in Saigon. “We like to sit and enjoy for a while.”

The older generation tend to favour more simplistic spots, while younger people choose the trendy, Instagram-friendly cafes. “Young people, we like to take selfies,” says Phuong, who is 18 years old. “We like to relax in pretty coffee shops and take nice photos.”

For young people, cafes are the perfect place to relax and hang out away from the prying eyes of their parents. “My family is strict but they are okay with me going to a cafe because they think I am studying,” laughs Phuong. “But actually, my friends and I just play video games and hang out.”

Coffee may have been introduced to Vietnam by the French, but the Vietnamese quickly took the reins and created a vibrant and interesting culture that’s vastly different to anything found in Europe. It’s safe to say that the whole country runs on rocket fuel. 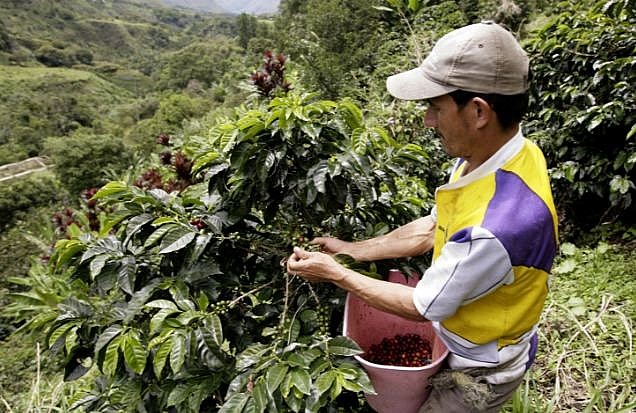 Colombian coffee is famous because of character named Juan Valdez from the advertisements of the National Federation of Coffee Growers of Colombia Due to the change in climate there was a major downfall in the production of coffee between 1980 to 2010.Due to this decrease it has achieved the third position as it was second to Brazil It was traditionally second to Brazil for coffee production but has moved to third due the rapidly expanding production of Vietnam. Even with the effect of climate, it has an output of 810,000,000 kilograms of coffee beans in 2016; Colombia remains a key player in the international coffee game. 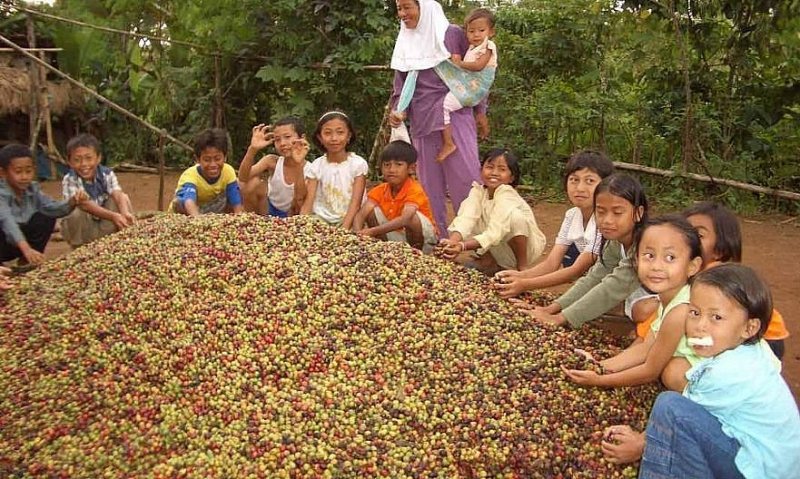 Indonesia produced over 660,000,000 kilograms of coffee beans in 2016 and has opted for a quantity over quality method as the climatic conditions flavours for the production lower-quality Robusta beans (less valued than the Arabica beans).But it has an ideal geographical location for coffee plantation, as it is near the equator and also has different mountain ranges. The Dutch introduced coffee to the Indonesians and after the colonization the coffee production was continued. Over 90% small-scale workers are employed by the coffee industry and the plantation occupies over 1 million hectares. Indonesia is known for producing high quality coffee bean knows as Kopi Lusaka. 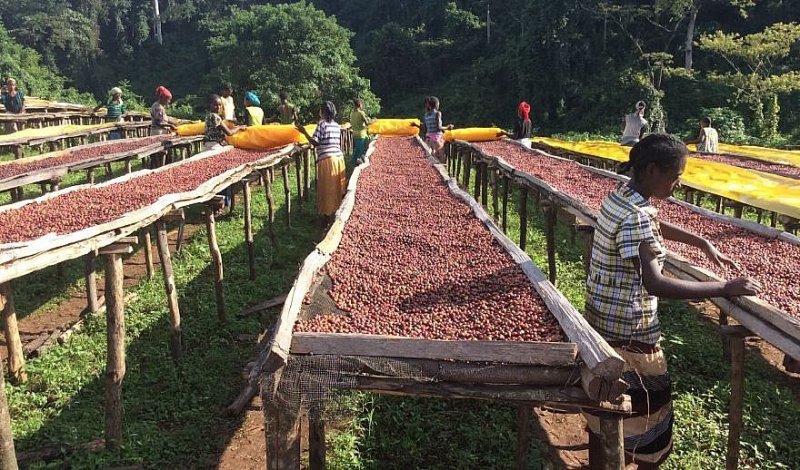 Ethiopia is the geographic home for Arabica coffee the most popular beans worldwide.

It produced about 384,000,000 kilograms of coffee beans in 2016. About 28% of Ethiopia’s yearly exports are because of coffee. This coffee production has provided working opportunities to 15 million people. As there is a domestication of the crop and the development in the farming various variations in the Arabica beans are produced with its own name and taste. The Harar, Limu, Sidamo, and Yirgacheffe beans are all trademarked varieties of the Arabica bean, with the rights owned and protected by the government of Ethiopia. 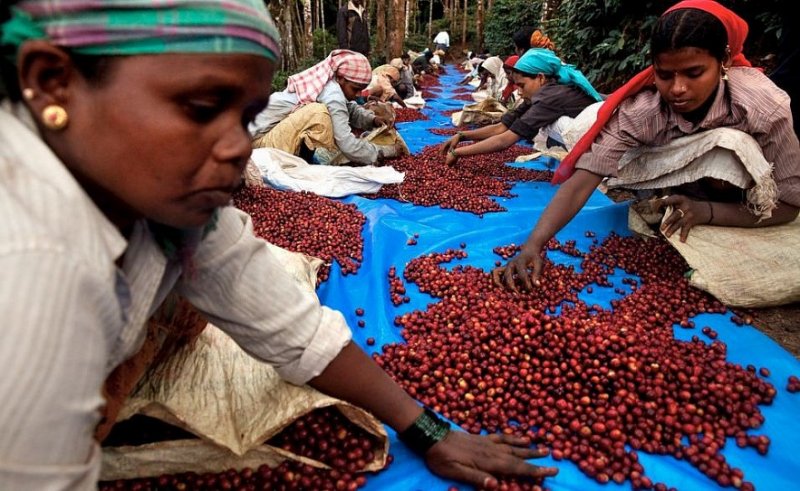 The subcontinent of India has diverse climatic conditions which is highly suited for the production of coffee. Although it is not a country that comes to mind for coffee production but India has produced 349,980,000 kilograms of beans in 2016.Coffee is mainly grown in the South-Indian hilly regions. These beans usually grow during monsoon and are planted alongside spices like cardamom, cinnamon which gives it a spicy taste. In 2004, Indian Coffee brand Tata won 3 gold medals at the Grand Cus De Cafe Competition. Even though coffee isn’t the most popular beverage in the country 80% of India’s coffee production is bound for export purposes, with the main buyers being Europe and Russia. This is one of the top ten largest coffee producing countries in the world 2019. 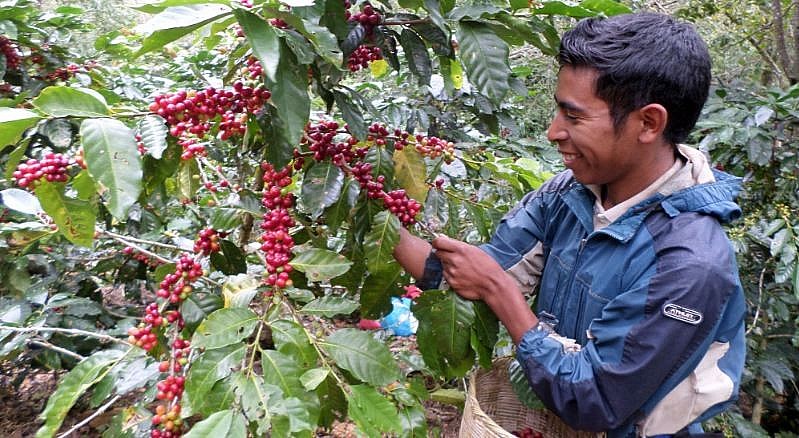 Honduras located to the west of Guatemala produced about 345,000,000 kilograms of coffee in the year 2016 and has got the title of Central America’s top coffee producer. Even though they still face problems related to a lack of national branding Honduras are mainly used in blends and are therefore less recognizable to the average consumer.

However, coffee remains a vital part of the the country’s economy. Being the largest producer in Central America, the coffee industry provides employment and revenue for a large part of the population, and it likely kept the nation’s economy afloat during the 2009 political crisis and coup d’etat. 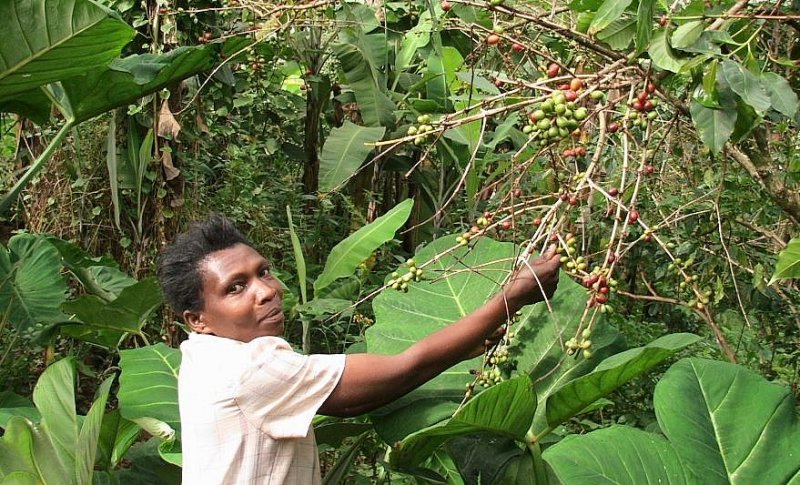 An unusual name that comes up in the world’s top coffee production is Uganda. It produced about 285,300,000 kilograms of coffee in 2016.It crossed Mexico in 2016 and is the 8th largest producer of coffee. The nation grows different types of coffee beans Robusta beans (a crop native to the Kibale forest area) and Arabica beans from nearby Ethiopia. Coffee being the vital part of the economy, the large population works in coffee based industries.

After government privatization in 1991there was a change and an increase of 5100% in production was seen. Uganda Coffee Development Authority. Controls the export of the Ugandan coffee. 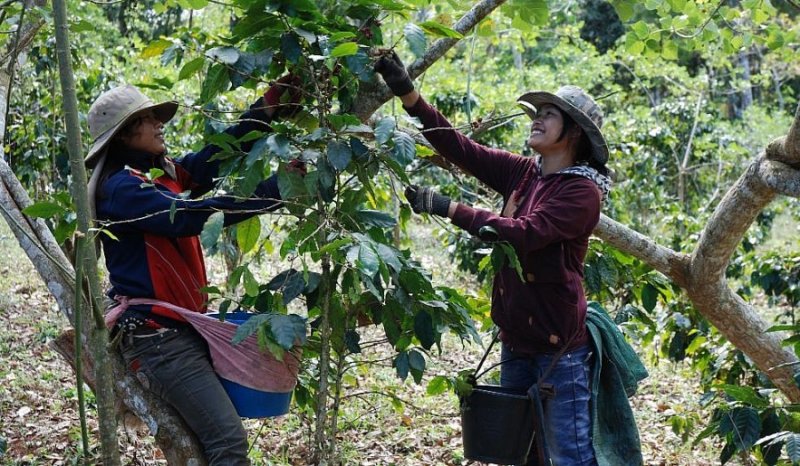 Bordered by the north of the United States, Mexico produces high quality Arabica beans grown in its coastal regions near the borders of Guatemala. In 2016, Mexico produced over 234,000,000 kilograms of coffee beans. As the International Coffee Arrangement was dismantled the worldwide coffee prices were no longer controlled which led in the decline of Mexico’s coffee production.

This decline in coffee prices and production led to the loss in income and social issues throughout Mexico. While coffee production declined over the 90’s and into the 2000’s the demand from the United States has led to a recovery. 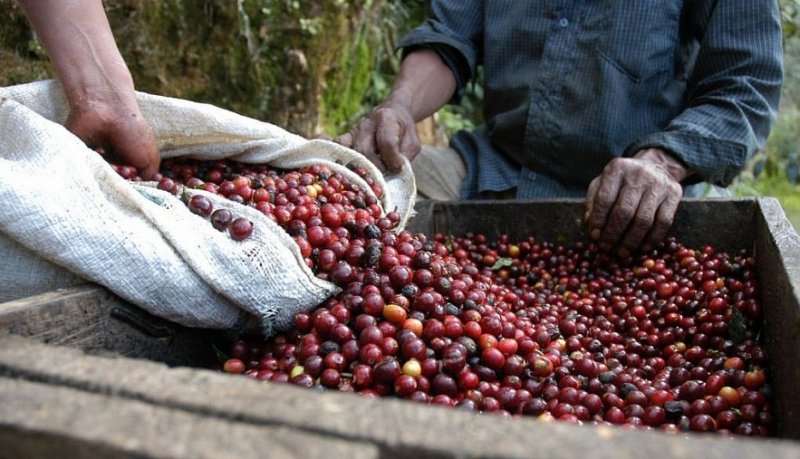 This Central American country produces about 204,000,000 kilograms of coffee beans in 2016 but was over taken by Honduras in 2011.The production numbers have remained consistent over the past few years. These beans are most abundant when the temperature lies between 16 and 32°C, and at altitudes between 500 and 5,000 metres above sea level. The main reason it started the coffee export was to replace indigo and cochineal. When the government began offering trade and tax there was a rise in the coffee industry. Anacafe (Asociación Nacional del Cafe), a marketing association was established to promote the countries coffee products.