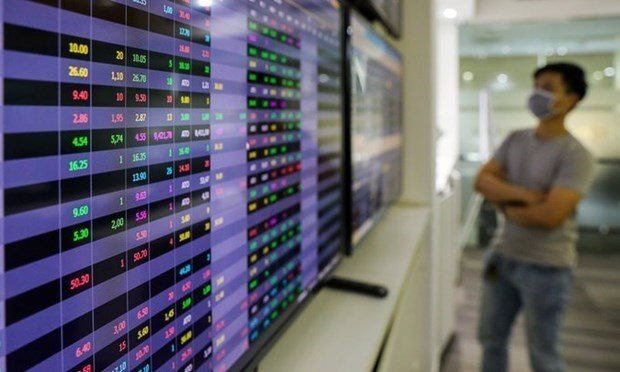 A man is seen watching stock information displayed on electronic boards. The local stock market ended the final session of the week in bearish mood, with the benchmark VN-Index of the HCMC market losing over 45 points today, August 20 – PHOTO: VNA

HCMC – The local stock market ended the final session of the week in bearish mood, with the benchmark VN-Index of the HCMC market losing over 45 points today, August 20.

With up to 302 decliners and only 75 advancers, the main index shed 45.42 points, or 3.3% versus the previous session to close at 1,329.43. Trading volume and value on the southern bourse improved over 65% and over 50%, respectively, at more than 1,200 million shares and over VND38 trillion. Shares traded in block deals contributed around VND1.4 trillion to the overall value.

Stocks in the VN30 basket significantly affected the main index, as all of them extended losses, with two-thirds of them plunging over 3%. Specifically, rubber group GVR and real estate firm VIC tumbled over 6% each.

Among financial stocks, only a few of them closed in positive territory such as FTS, AGR, VIX, HCM, and CTS, while SSI, VCI, TVS, and VDS and bank stocks were losers.

In particular, a host of bank stocks fell sharply in the afternoon phase, with TCB, BID, CTG, ACB, MSB, and OCB contracting 4-5%, other lenders like VCB, VPB, and MBB declining around 3%.

Regarding construction and property stocks, aside from the big decliner VIC, other largecaps such as VHM, NVL, VRE, and PDR followed the market downtrend. Of them, KDH lost over 5% while DIG and DXG fell over 6%.

Similarly, many steelmakers ended in a downbeat mood. HPG, HSG, and TLH inched down around 4%, NKG plunged 5.6%.

On the northern bourse, the HNX-Index lost 8.01 points, or 2.31% compared with the session earlier at 338.06, with 59 winners and 160 losers. Three lenders---BAB, SHB, NVB---extended losses. Also, many largecaps were big underperformers such as PVS, SHS, and PAN.