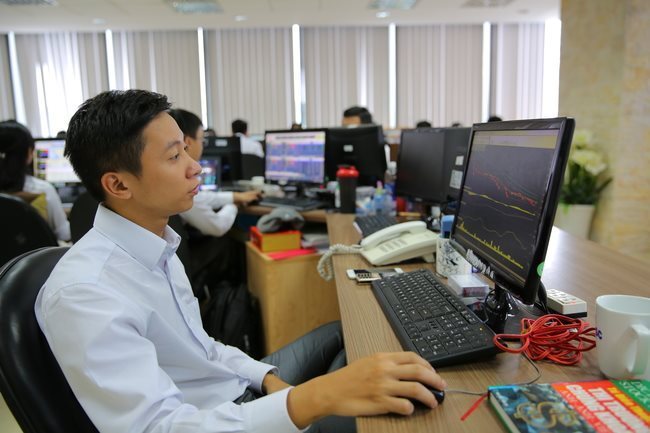 An employee of HCMC Securities Corporation looks at stock quotations on a desktop computer The benchmark VN-Index of the HCMC market continued the downtrend, falling for the second straight session today, August 18 - PHOTO: THANH HOA

HCMC – The benchmark VN-Index of the HCMC market continued the correction phase, falling slightly for the second straight session, after it failed to beat the 1,370-point level today, August 18.

With 172 stocks rising and 197 others falling, the main index fell a slight 2.15 points, or 0.15% over the session earlier at 1,360.94. Trading volume and value on the southern bourse slid over 10% and 5.3% at nearly 690 million shares and over VND24 trillion. Shares traded in put-through transactions contributed some VND1.8 trillion to the total value.

Aside from these two losers, bank stocks left a negative impact on the VN-Index as up to six of the 10 major underperformers were lenders VPB, TCB, BID, VIB, SSB and MSB.

Further, none of the bank stocks made gains, with MSB being the biggest decliner, followed by VPB, VIB and LPB, which all lost more than 1%. The remaining bank stocks fell less than 1%.

Securities stocks also experienced profit-taking in the afternoon phase. Brokerage SSI reversed course to end 1.49% lower, FTS also edged down slightly. Meanwhile, their fellows APG and VIX closed at their ceiling prices, and other large stocks in the group such as VCI, HCM maintained growth.

Steelmaker HPG and fuel distributor PLX closed unchanged, while consumer goods firm MSN expanded 1.51% to VND134,500 and was the biggest contributor of the index. Dairy firm VNM also advanced by 0.78%. Some other winners included GVR, SAB, GAS that increased by 0.13-0.34%.