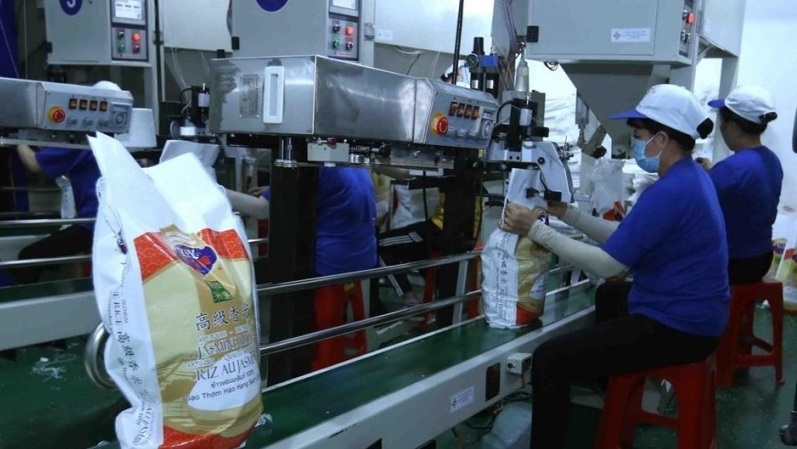 Rice is being packaged for export.

NDO - It is already the prime harvest time for the summer-autumn rice crop, but rice exporters are suffering a headache as prolonged social distancing is making it difficult for them to purchase the grain. Stronger measures are needed to solve the difficulties they are facing.

According to the Vietnam Food Association (VFA), rice prices are varying between difference provinces. Prices are higher where traffic is free-flowing and lower where movement is restricted.

Owing to the social distancing measures put in place to prevent the spread of COVID-19, rice exporters must adopt the model of “three on-site”, referring to on-site working, on-site eating and on-site breaks, resulting in reduced capacity. In addition, difficulties related to logistics have caused them to be unable to ship the grain to their partners despite having already secured orders.

Intimex, for instance, is expected to be able to ship only 30,000-35,000 tonnes compared with total orders of nearly 120,000 tonnes, including those cancelled since July, as they have been unable to hire cargo ships. The reason being that there are no vessels large enough for Africa-bound orders due to concerns over the epidemic.

Furthermore, shipping costs are extremely high, with a container costing US$15,000 to be transported to the United States. The movement of goods between domestic localities is also being hampered due to COVID-19 restriction measures. Such difficulties are causing rice exporters to not only suffer from revenue reductions but also face the risk of losing customers when the pandemic is eventually put under control.

VFA Vice Chairman Nguyen Trung Kien said there are currently only regulations on the green channel for roads while those for waterways are not clear and are subject to each locality, while 90% of rice transport is by waterways.

Furthermore, southern ports are in a serious shortage of workers due to regulations that restrict movement and people not being allowed to leave their homes after 6pm. Rice exporters are finding themselves in distress over rice logjams at seaports.

To deal with the situation, the VFA has suggested that the Government and ministries concerned promptly create a green channel for waterway transport and unify the rules across the southern region. The association also asked the Vietnam Maritime Administration to take measures to bring down the exorbitant shipping costs.

To remove the difficulties facing rice exporters, Cat Lai Port in Ho Chi Minh City reopened a wharf on August 16 to resume rice exports with a capacity of 70 containers per day, equivalent to around 1,750 tonnes of rice. This capacity is relatively small compared to the export demand but has partially resolved the problems facing enterprises amid distancing measures and large backlogs.

More than a month ago, Cat Lai Port was forced into temporarily closure due to COVID-19 and rice loading at this wharf was suspended.

Besides resolving difficulties in warehousing, the Ministry of Industry and Trade (MOIT) recently proposed that the Prime Minister assign the State Bank of Vietnam to direct commercial banks to provide loans with lower interest rates for rice exporters and allow them to use the products to be purchased as collateral.

Previously, the MOIT asked the Ministry of Transport, the Ministry of Health and other agencies concerned to urgently open the green channel for waterway transport. The MOIT also proposed allowing workers of seaports to go out after 6pm in order to clear the backlogs as long as they test negative for the coronavirus.

For its part, the Maritime Administration has also requested shipping lines to refrain from raising their shipping costs until the end of the year.

Only when the aforementioned measures are taken in tandem with each other can the difficulties facing rice exporters be resolved so as to purchase all the rice of the summer-autumn crop from farmers in a timely manner.