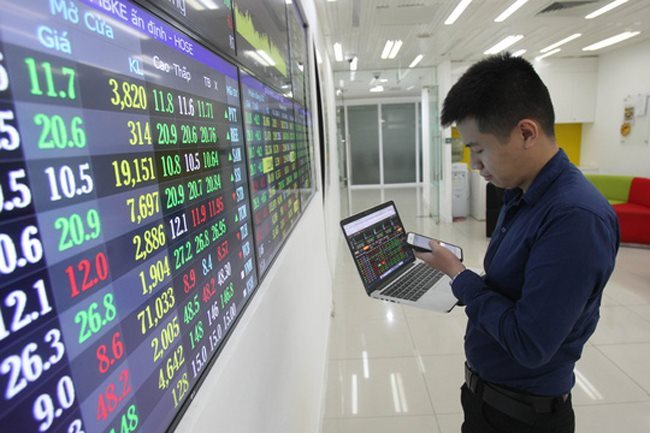 A man uses a cellphone while monitoring stock prices. The impressive performance of stocks in the banking and securities sectors helped the benchmark VN-Index of the HCMC market beat the 1,370-point level today, August 16 - PHOTO: VNA

HCMC – The impressive performance of stocks in the banking and securities sectors helped the benchmark VN-Index of the HCMC market beat the 1,370-point level today, August 16.

With 266 winners and 117 losers, the main index gained 13.91 points, or 1.03% against the previous session at 1,370.96. Turnover on the southern bourse improved over 11% in both volume and value at over 827 million shares and over VND27.5 trillion. Shares traded in block deals contributed some VND1.3 trillion to the overall value.

Financial stocks staged the best performance as many of them closed in positive territory or even hit their upper limits. Especially, around half of them hit their ceiling prices such as VCI, FTS, CTS, VIX, VDS, AGR, and APG. Two brokerages SSI and HCM all soared 5.3%.

Besides, among bank stocks, VCB, BID, ACB, VIB, STB, HDB, MSB, OCB expanded 1.2%, TCB and VPB rose over 3% each, while MBB was the biggest winner in the group as it rose 4.7%. They were also actively traded stocks, with MBB taking the lead with 31.96 million shares changing hands, followed by TCB with 30.3 million shares and STB with over 24 million shares traded. Also, MSB, VPB, LPB, ACB reported a matching volume of over 10 million shares each.

Apart from securities and bank stocks, many steelmakers ended on an upbeat note with TLH hitting its upper limit, while HPG, HSG, SMC, POM rose around 2% each. In addition, some chemical fertilizer manufacturers, shipping lines, and sugar makers were winners such as LSS, VOS, and TSC.

Meanwhile, some major property developers reversed course to end lower, such as VHM, VIC, KDH, and DIG. Of them, housing developer VHM declined over 3.3% to VND116,000. On the contrary, property firms NVL and VRE edged up slightly. Also, DXG, KBC, ITA, IJC, TDH increased around 4%.

In the VN30 basket, aside from the above-mentioned good performers, rubber group GVR surged 6.9% with 10.69 million shares transacted.

On the northern bourse, the active cash flow also helped the HNX-Index close at its intraday high. With 86 advancers and 41 decliners, the index added 6.56 points, or 1.95% versus last Friday to stay at 343.53. Similar to the HCMC market, securities stocks on the Hanoi market reached their upper limits at the close, including TVB, APS, BSI, and VIG.