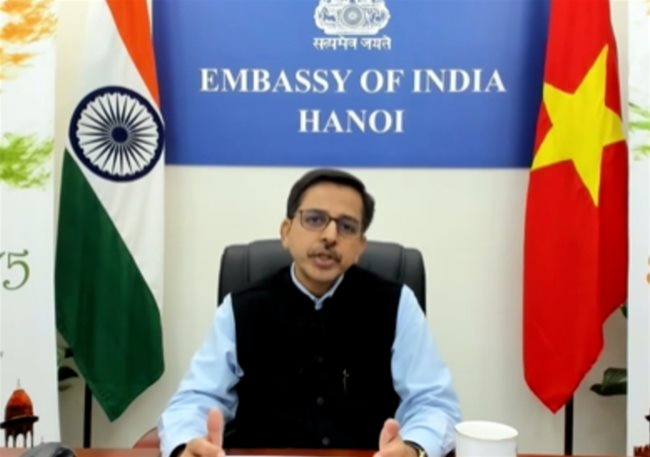 Ambassador of India to Vietnam Pranay Verma speaks at the “India – An Emerging Global Power and Its Relationship with Vietnam” webinar - PHOTO: COURTESY OF CONSULATE GENERAL OF INDIA IN HCMC

HCMC - The Consulate General of India in HCMC on August 13 organized a webinar on the topic “India – An Emerging Global Power and Its Relationship with Vietnam” in the presence of more than 270 participants, who are senior government officials, scientists, researchers, lecturers and students from HCMC and the southern provinces of Vietnam.

The event is part of India@75, an initiative of the Government of India to celebrate and commemorate 75 years of progressive India and the glorious history of its people, culture and achievements.

The Consulate General of India in HCMC is celebrating by conducting a series of webinars on India’s socio-cultural, political and economic identity to enhance interaction, engagement and promote a mutual understanding between the people of India and Vietnam.

The webinar is a platform to share knowledge on the international relationship between India and Vietnam.

Throughout the event, officials, scientists, researchers, lecturers and students can gain insight into the current perspective of India on the global scale as well as key achievements in the Comprehensive Strategic Partnership between the two countries.

About 270 government officials from the provincial Departments of Foreign Affairs, lecturers, researchers and students from renowned universities in HCMC and the southern provinces of Vietnam joined the webinar with an in-depth discussion with senior speakers from India and Vietnam.

To emphasize the meaning of the event, Ambassador of India to Vietnam Pranay Verma said in his opening remarks, “The celebration of India@75 Independence Day is the occasion for us to reaffirm our commitment, to take our special relationship, our Comprehensive Strategic Partnership with Vietnam to newer heights.”

The webinar consisted of four keynote remarks by senior speakers from both countries.

Shyam Saran, former Foreign Secretary of India, shared his view on the relationship between India and Vietnam in different areas such as geo-politics, economics and multilateral concerns especially during the pandemic. Furthermore, he emphasized ways to reinforce this long-lasting relationship by conducting multiple means of cooperation in politics, trade, maritime issues, technology and especially in people-to-people activities.

Prof. S. D. Muni, former Ambassador and Special Envoy, Government of India, shared his knowledge on the “Foreign Policy of India in the last 75 years”. He also mentioned how India has played a significant role in helping its neighbors secure their freedom, peace and stability since 1947, especially in the form of the “Act East Policy”.

Dr. Ton Sinh Thanh, former Ambassador of Vietnam to India, extended his felicitations on the 75th year of the Indian independence. The former ambassador highlighted the key achievements of India since its 1st Independence Day as the world’s fifth largest economy and fourth in military strength.

Moreover, Dr. Thanh believed relations between Vietnam and India will continue to flourish in the future based on three foundations: historical and cultural bonds, strategic parallelism and the potential cooperation between the two nations.

According to Assoc. Prof. Dr. Hoang Van Viet, director of the Thai Center, former Dean of the Faculty of Oriental Studies, University of Social Sciences and Humanities HCMC, the comprehensiveness of the India-Vietnam relationship is based on the actual needs of the two countries on the principle of mutual benefit, especially in the fields of economy, trade and investment.

Viet concluded that the Vietnam - India Comprehensive Strategic Partnership is built on traditional humanitarian values, founded during the difficult times of both nations and has now adapted to the current and future era.

The webinar ended with impressive comments from guest speakers to confirm the stable development of this special relationship.

The Consulate General of India will continue to celebrate this special event with upcoming webinars on various topics such as culture, social policies, technology, medicine and pharmacy.