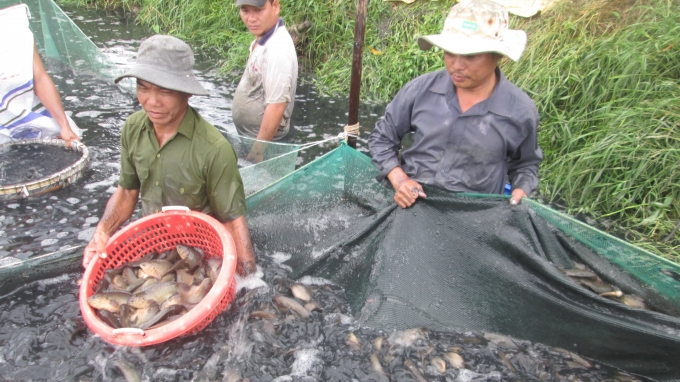 NDO - As many as 1,064 agricultural wholesale traders registered to consume agricultural products through the Southern Working Group of the Ministry of Agriculture and Rural Development (Working Group 970) as of August 12.

The information was announced at a virtual meeting between Mekong Seafood Connection Co., Ltd. and the Departments of Agriculture and Rural Development of four southern provinces: Kien Giang, An Giang, Dong Thap and Soc Trang.

Held by Working Group 970, the event aimed to seek and boost opportunities to link the production and consumption of agricultural products in southern provinces amid the COVID-19 pandemic.

The company needs items such as giant freshwater shrimp, tra fish, tilapia, persimmon, dried seafood products, and others, at about 1,500 tonnes per month. Thus, the company need to connect with cooperatives to build a stable raw material area, particularly for local specialities.

Deputy Director of the Department of Agriculture and Rural Development of Kien Giang Province Le Huu Toan said that thanks to the connection of Working Group 970, the province has consumed many types of agricultural products. Most recently, two enterprises have purchased giant freshwater prawns to sell in Ho Chi Minh City, helping in the consumption of local farmers’ products.

Deputy Director of the Department of Agriculture and Rural Development of An Giang Province said that the province has a large raw material area for tra fish, red tilapia, giant freshwater shrimp, and frog, and is ready to connect with businesses to form production chains.

In Dong Thap Province, seafood products such as red tilapia, tilapia, tra fish, frogs, and giant freshwater prawns also amount to tens of thousands of tonnes per year and are in great need of consumption in the context of the current COVID-19 pandemic.

*The Vietnam Cooperative Alliance also hosted an online meeting with the Union of Cooperatives in 63 provinces and cities on August 12 regarding the consumption of goods produced by cooperatives, especially foods and essential necessities for localities under social distancing.

The event was held with the aim of easing difficulties for many agricultural cooperatives relating to supply chain disruptions, large inventories of tens of millions of tonnes, increased input costs, and others.