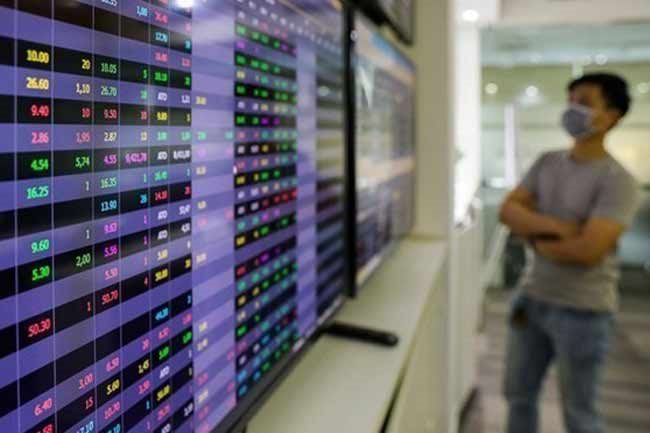 A man monitors stock prices on an electric board. The VN-Index has risen for nine straight sessions - PHOTO: VNA

HCMC – The selling pressure eased, while the demand for stocks, especially bank stocks, improved today, August 5, sending the VN-Index of the Hochiminh Stock Exchange up for the ninth consecutive session.

Trade volume totaled over 635 million shares worth VND19.3 trillion, down nearly 4% in volume and 9% in value from the session earlier. There were over 45 million shares valued at some VND1.8 trillion transacted in block deals.

Among blue-chip stocks, rubber group GVR and steelmaker HPG remained bright spots as they rose 4.2% at VND34,850 and 2.7% at VND48, 800, respectively. There were more than nine million GVR shares and 29.7 million HPG shares changing hands.

In the group of bank stocks, only BID fell a slight 0.1%, while the remaining gained. STB was the most actively traded stock on the southern bourse with more than 30.72 million shares traded.

On the Hanoi Stock Exchange, the HNX-Index closed at its intra-day high as many large-cap stocks extended their growth, such as lender SHB and agricultural firm PAN.

Lender SHB was the key supporter of the bourse as it surged 5.1% at VND28,800 and led the bourse in terms of liquidity with 36.9 million shares matched.