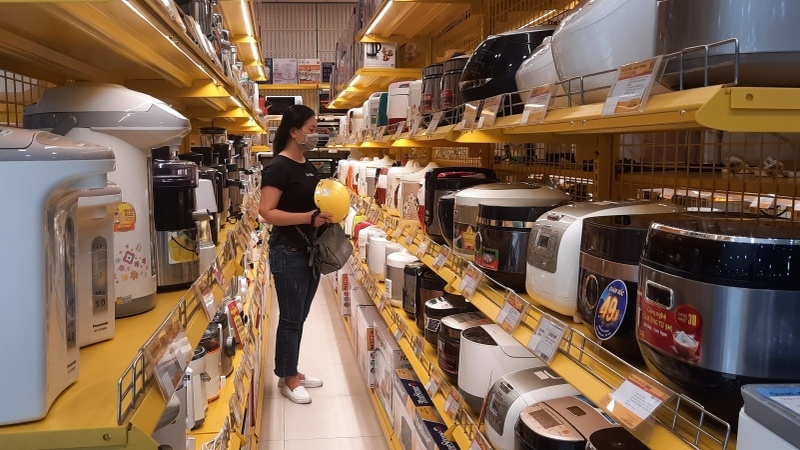 Over the past few years, a boost in regional trade and investment ties has brought about a wide range of opportunities for consumers

NDO - Since its official establishment in the ASEAN Economic Community, Vietnam has been boosting its exports to the region thanks to the bloc’s trade facilitation, with the country making efforts to lure regional funding, optimising investment in its conditional sectors.

The Ministry of Industry and Trade (MoIT) has reported that Vietnam’s trade with other Southeast Asian markets has kept rising year-on-year.

Specifically, Southeast Asia is now Vietnam’s fourth-largest export market, after the US, China, and the EU. Vietnam’s export value to the region soared to US$24.7 billion in 2018 and US$25.3 billion in 2019, and stood at US$23.1 billion last year. The figure in the first seven months of this year was US$16.2 billion, up 25.8% year-on-year.

Meanwhile, Southeast Asia is also Vietnam’s third-largest import market. The country’s import turnover from other regional member markets totalled US$32 billion in 2018, US$32.1 billion in 2019, and US$30 billion in 2020. The figure reached US$24.9 billion in the first seven months of this year, a 49.6% rise as compared to the same period last year.

In the first seven months of the year, China was the largest import market of Vietnam, with a total value of US$62.4 billion – up 48.8% year-on-year, followed by the Republic of Korea (US$29.8 billion, up 20.6% as compared to the same period last year).

However, according to the MoIT, Vietnam’s big trade deficits with these markets is not worrying as about 95% of imports are used for production within the country, with products locally consumed and exported.

According to Vietnam’s General Statistics Office, many drivers embracing tax cuts under the region’s commitments have enabled the country to swell its investment and trade ties with other regional economies. In late 2015, the ASEAN Economic Community was officially established as part of the ASEAN Community.

Statistics from the Ministry of Planning and Investment (MPI) showed that as of late July 2021, Vietnam’s investment to some regional markets remain positive, including Laos (almost US$5 billion), Singapore (over US$300 million), and Cambodia (US$2.7 billion).

Notably, in the first seven months of this year, Vietnamese investment projects in these countries were privately funded. For example, the Truong Thanh Corp., JSC has announced a scheme to contribute capital to Natuzzi Singapore Pte Ltd. The capital is tantamount to 20% of the Singaporean company’s charter capital.

In another case, conglomerate Vingroup was already granted a licence in Singapore to implement a US$20.5 million project to trade in electronic products, telecom equipment, automobiles, and home appliances.

Meanwhile, according to the MPI, as of July 20, the total investment from ASEAN member economies in Vietnam stood at over US$88.78 billion, with Singapore’s investment valued at US$62.34 billion, followed by Thailand (US$12.9 billion), Malaysia (more than US$13 billion), Indonesia (US$611.6 million), and the Philippines (US$615.25 million).

For instance, between January and July 20, 2021, Singapore became the largest investor in Vietnam with total new investment of US$5.91 billion, Thailand (US$3237.62 million, and Indonesia (US$4.73 million).

After implementing projects in Vietnam, many of these ASEAN investors have also expanded the import of goods from their home markets into Vietnam, after which they have also exported goods back to their countries.

In fact, in addition to tariff cuts and total removal under regional commitments, the Regional Comprehensive Economic Partnership (RCEP) was inked last November between the 10 ASEAN state members and partners including China, Japan, the Republic of Korea, Australia and New Zealand. China, Japan, Thailand and Singapore have approved the deal. Vietnam is expected to followed suit in 2021.

The RCEP is aimed at phasing out 90% of import tariﬀs among member states within 20 years, while also promoting ﬂows of services and investment.

Besides this, another driver for Vietnam to further increase its investment and trade cooperation with ASEAN is the ASEAN Comprehensive Investment Agreement (ACIA). In February 2021, Vietnam adopted the fourth protocol revising this deal.

The ACIA hopes to promote trade and investment in the ASEAN region by developing a free, open, and transparent investment regime. Without restrictions or discrimination, other member states will be more willing to participate in trade in Vietnam, and vice versa. What is more, ACIA centres on five major sectors namely manufacturing, agriculture, fishery, forestry, mining, and quarrying, all of which are developing sectors in Vietnam.

At a recent meeting between Prime Minister Pham Minh Chinh and Singaporean Minister for Foreign Affairs Vivian Balakrishnan, the former suggested Singapore facilitate Vietnam to export and distribute some of Vietnam’s goods in Singapore, such as furniture, footwear, agro-forestry-fishery, e-car, electrical cables, garments and textiles, and processed foodstuffs.

Vietnam also recommended that both countries should accelerate negotiations and the inking of deals on the mutual recognition of quarantine standards in the agro-forestry-fishery and processed foodstuff sectors, while further capitalising on benefits from the RCEP and the Comprehensive and Progressive Agreement for Trans-Pacific Partnership.

As part of its strategy on attracting foreign direct investment (FDI), Vietnam has been making great efforts to woo FDI with emphasis placed on projects with high levels of technology and the creation of high value which can help raise Vietnam in the regional and global value chains.

Within this strategy, Vietnam also wants to attract FDI into some sectors, which represent opportunities for investors looking to tap into this market segment.

Specifically, the amended Law on Investment (LOI) introduces a new ‘negative list’ which covers business lines that are completely off-limits and others that come with certain conditions.

According to pan-Asia consultancy firm Dezan Shira & Associates, while conditional sectors offer potential opportunities, investors should study the law carefully due to the number of restrictions on control, activities, and capital contributions.

For many foreign investors, Vietnam’s greatest potential lies in its conditional investment sectors. These areas of the Vietnamese economy are still largely untapped by foreign capital and present prime opportunities for investors to enter a new market with little or no competition.

Opportunities within conditional sectors are, however, tempered by a number of restrictions on control, activities, and capital contributions. Each conditional industry is subject to a specific set of restrictions and all investors should be sure to evaluate their exposure.

in many conditional sectors, the government may impose additional limitations on business activities, which companies with foreign ownership may be required to adhere to. These are similar to the licensing, approvals, and other requirements that are applied to all enterprises, however, these restrictions are specifically laid out for entities involving foreign enterprises.

Under the amended LOI, business lines that are banned from foreign investment activities include:

· Trading in narcotics as per Appendix I of the LOI;

· Trading in chemicals and minerals as per Appendix II of the LOI;

· Trading in wild flora and fauna as specified in Appendix I of the LOI;

· Business-related to human cloning; and

The amended LOI has reduced the number of conditional business lines to about 227 from around 240. These business lines and industries are subject to certain conditions and approvals as per Appendix IV of the law. These include:

· Fishing vessel crew training, among others.