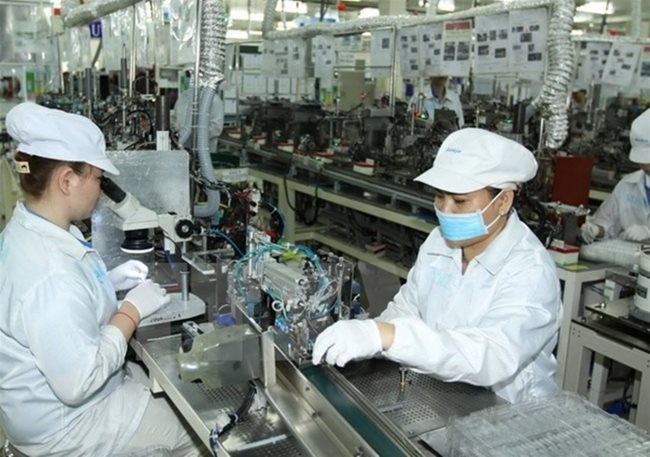 People work at a Japanese-invested factory at the Saigon Hi-tech Park in HCMC. HCMC’s budget collection amounted to VND198.5 trillion in the first half of this year - PHOTO: VNA

HCMC - HCMC’s budget collection in the first half of 2021 rose 19.75% compared with the same period last year to some VND198.5 trillion (US$8.62 billion), according to data released by the HCMC People’s Committee.

The HCMC People’s Committee said this is a positive result amid the worsening Covid-19 situation.

HCMC is tasked with collecting a budget of VND365 trillion this year. With VND198.5 trillion in budget collection from January to June, the city met 54.42% of the entire year’s target.

In 2019, the city earned VND410 trillion. However, its budget collection fell sharply to VND371 trillion due to the Covid outbreak in 2020, meeting only 91% of the whole year’s target.

In recent years, the city’s budget revenue has always made up 25-27% of the country’s total.

Despite the coronavirus resurgence, the city reported a 5.46% increase in the gross regional domestic product (GRDP) in the first half of 2021, according to the HCMC Statistics Department.

Of these, the agro-forestry-fishery sector posted a 0.48% decline. Meanwhile, the manufacturing and construction and service sectors and excise taxes less subsidies on products grew 3.58%, 5.86% and 7.08%, and contributed 0.84%, 3.66% and 0.97%, respectively, to the overall economic growth rate.

The GRDP growth in the first half of 2021 was much higher than the 1.02% in the same period last year, but the second lowest growth over the past decade.

The city’s Index of Industrial Production increased 5.9% over the same period last year. Among the four key industries, mechanical engineering and electronics had the highest growth with two digits, followed by food processing and pharmaceutical chemistry.

The total retail sales of goods and services in the first half reached nearly VND541.7 trillion, up 7.3% year-on-year.