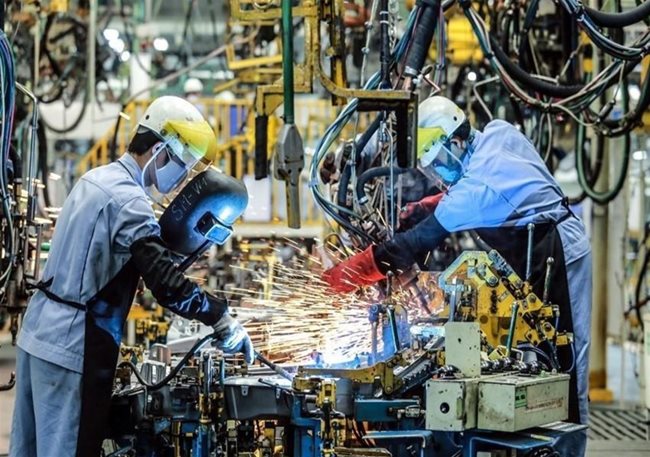 Employees at work at a factory. The country saw the IIP in July inch up a mere 1.8% month-on-month, the lowest growth rate over the past seven months - PHOTO: VNA

In July, the manufacturing and processing sector edged up 2.9% month-on-month, the electricity production and distribution sector up 6.7% and the water supply and waste treatment sector up 4.4.%, while the mining industry fell by 8%, according to a report released by the General Statistics Office on July 29.

However, between January and July, the IIP picked up 7.9% year-on-year, well above 2.6% in the same period last year.

The industries with the positive growth included manufacturing and processing, which gained 9.9%; electricity production and distribution, up 8.2% and water supply and waste treatment, up 5.6%.

The report also indicated that among 19 provinces and cities in the southern region which are applying the social distancing order under the prime minister’s Directive 16, seven localities saw a decrease in IIP, while IIP in the remaining 12 localities staged a rise in July.

Despite the pandemic, Bac Lieu Province still maintained growth in industrial production in July, with the province’s IIP improving 13.7% year-on-year, supported by electricity production with a surge of 137.6%. Binh Phuoc Province also saw a 12.2% rise in the index as food processing and manufacturing soared by 29.5%.

Hanoi City’s IIP in July grew 7.8% year-on-year. The city has been practicing the shelter-in-place order since July 24, the local media reported.