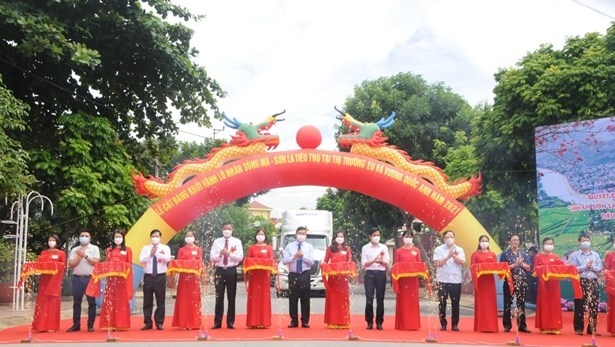 NDO – Son La province held a ceremony on July 21, in Song Ma district, to announce the decision granting certificates of trademark registration for the "Son La longan" and to cut the ribbon to send off the batch of Song Ma-Son La longans to the EU and UK markets for 2021.

At the ceremony, the leader of the National Office of Intellectual Property under the Ministry of Science and Technology awarded certificates of trademark registration for the "Son La logan" to the leader of the People's Committee of Son La province.

In addition, the provincial Department of Science and Technology granted the right to use the certification to 25 cooperatives in Song Ma district.

On the occasion, representatives of enterprises and cooperatives signed a memorandum of understanding on the production and consumption of longans.

The delegates also cut the ribbon to send off the batch of Song Ma-Son La longans to the EU and UK markets for 2021.

According to Nguyen Van Phuong, Vice Chairman of the People's Committee of Song Ma District, the successful export of longan products to the EU and UK markets has contributed to promoting production development, affirming the position and value of agricultural products on the international market, contributing to promoting local production, creating jobs and increasing incomes for longan growers in Song Ma district in particular and Son La province in general.

Longans are one of the key crops bringing economic efficiency to the people of Son La province. In recent years, Son La longan products have been favoured by domestic and foreign consumers, highly lauded for their quality and product design.

According to statistics, in 2021, the area of longan production in Son La province is estimated to be more than 19,200 hectares, concentrated in districts such as Song Ma, Mai Son, Yen Chau, Muong La, with an output of 98,500 tonnes; in which, 2,200 hectares of longan are eligible for export, with an output of nearly 22,000 tonnes, mainly exported to China, Australia, the US and EU.

Song Ma district alone is the largest longan granary of Son La province with over 7,200 hectares; of which, nearly 5,900 hectares have been harvested, with output of over 55,800 tonnes, accounting for more than 55% of the province's total output.