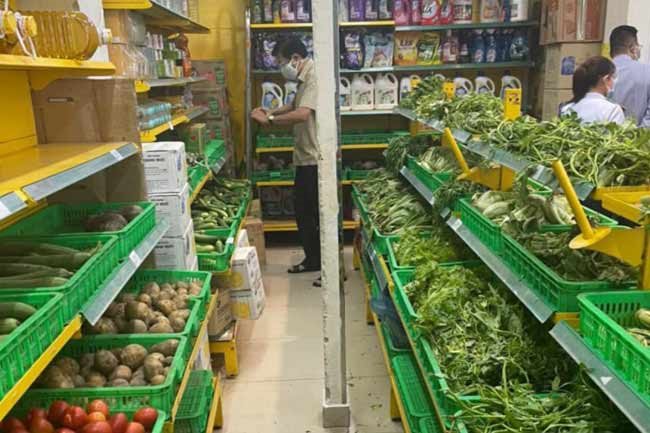 Fresh vegetableds are seen on the shelves of a local convenient store. HCMC is seeking help from the Ministry of Agriculture and Rural Development as the city is facing a severe shortage of vegetables and eggs - PHOTO: TNO

HCMC – The HCMC Department of Industry and Trade has proposed the Ministry of Agriculture and Rural Development help the city connect with other localities and suppliers to ensure sufficient food and foodstuffs for residents in the city as it is facing a shortage of vegetables and eggs.

On July 18, the department struggled to keep up with the demand for food and foodstuffs in the city, amid the temporary closure of three wholesale markets, difficulties in cargo transport and falling supplies. Accordingly, the city is facing a shortage of some 1,000-1,500 tons of vegetables and 300,000-400,000 eggs per day, Tuoi Tre Online newspaper reported.

On the same day, the Minister of Agriculture and Rural Development signed a decision establishing a team directing the production and supply of agricultural products in the southern region.

As a two-week stay-at-home mandate has been issued in 16 southern provinces including 13 in the Mekong Delta, residents there have bought products for stockpiling. As a result, traders in HCMC are finding it hard to look for supplies.

According to the HCMC Department of Industry and Trade, before practicing social distancing under the prime minister’s Directive 16, the city consumed 7,000 tons of food per day, including vegetables, fruits and meat. Since the suspension of three wholesale markets, the food supply has plunged by over 50%.

The department has called on supermarkets to increase their supplies from 1,130 to nearly 2,500 tons, but it has failed to keep up with the demand from local residents. Supermarkets normally meet just 30% of the consumer goods demand in HCMC.

In addition, some traditional wet markets have been reopened to sell vegetables. The department will work with districts to reopen markets meeting anti-pandemic requirements.