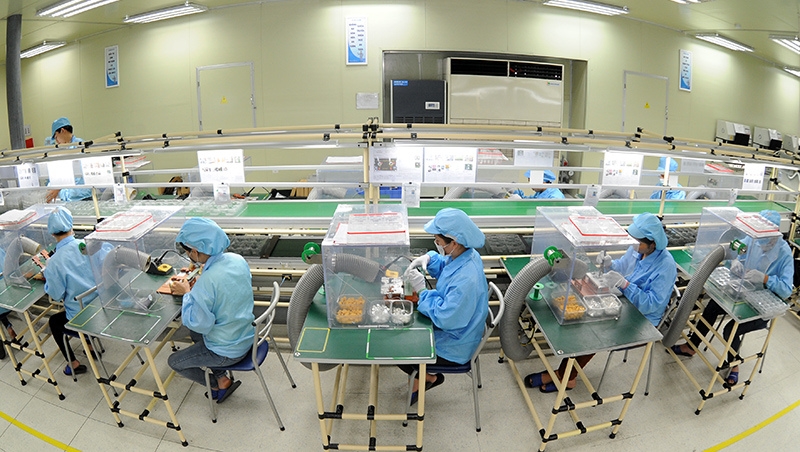 NDO - Total foreign direct investment (FDI) in the first half of this year decreased slightly by 2.6% while FDI disbursement increased by 6.8% over the same period last year which demonstrates the attractiveness of Vietnam’s investment environment to international investors despite the COVID-19 outbreak. However, to achieve the goal of selective investment attraction, several inadequacies need to be addressed.

The Foreign Investment Agency under the Ministry of Planning and Investment said that as of June 20, total newly registered capital, supplemented capital and capital contributions and share purchases by foreign investors had reached US$15.27 billion, equivalent to 97.4% of the same period in 2020.

According to the Foreign Investment Agency, the reduction in the number of newly licensed and adjusted FDI projects, capital contributions and share purchases by foreign investors is due to the decrease in global FDI inflows and the complicated development of the pandemic in Vietnam’s partner countries.

However, there are also subjective reasons including Vietnam's selective investment attraction policy, causing a decline in the quantity and increases in the quality of FDI projects in addition to cumbersome procedures and inefficiency in investment promotion activities in localities.

From a positive perspective, this can be considered a screening of small projects in favour of attracting large-scale projects. However, according to Chairman of the Association of Foreign Investment Enterprises Nguyen Mai, due to the recent attraction of a number of billion-dollar projects, the average capital per project has been larger. In essence, the average capital of projects has yet to increase, and it is premature to say that there has necessarily been a screening of small projects as one of the steps to improve the quality of FDI inflows.

“Even Hanoi is also attracting a lot of small-scale projects, but there is a lack of the high-quality projects that the city is looking for. Local governments need to have a direction to approve small projects worth US$2-3 million for domestic enterprises. For foreign investors, it is advisable to select projects of sufficient scope to improve the quality of foreign investment according to Politburo Resolution No.50-NQ/TW on orientations to enhance the quality of foreign investment until 2030,” Mai noted.

Solving internal problems is the most difficult

Thanks to the maintenance of macroeconomic stability and impressive growth before the pandemic, Vietnam still has many competitive advantages in attracting global FDI. In the socio-economic development plan for the 2021 – 2025 period, many localities will continue to consider FDI attraction as one of the most important factors for success. The advantage of attracting FDI comes not only from the geographical location and the synchronisation of infrastructure but also from the preferential policy for foreign investors through tax and land rent incentives.

Although the problem of a “race to the bottom” among localities to attract FDI has been adjusted, Nguyen Dinh Cung, former director of the Central Institute for Economic Management (CIEM) said that there has not been a clear change in regional linkage to form joint forces to welcome FDI projects of a worthy scale, even though this is one of the important issues regarding FDI attraction in the new period.

For example, the provinces and cities of Hung Yen, Hai Duong, Hai Phong and Quang Ninh have plenty of room in terms of land to build a series of large-scale industrial parks, forming an area large enough to attract giant high-tech enterprises. In terms of infrastructure, these areas have completed synchronising their highways, seaports and airports systems to be able to connect with each other, but there is no link between the four localities to take advantage of the available resources.

“Indeed, these provinces have the ability to link up to receive more worthy investment projects but they have yet to link with each other to further their strengths. Do we ensure such a policy of linkage takes place, or will we continue to let localities compete with each other, both scattering resources and reducing their ability to attract investment?" Nguyen Dinh Cung said.

According to economic experts, Vietnam has a great opportunity regarding the shift of global FDI flows. How to take advantage of opportunities lies not only in the ability to solve external challenges, but more importantly, in dealing with internal problems in policy implementation. One of those issues is that investment attraction must be based on the general socio-economic development plan of the locality, the economic region and the national plan.

Nguyen Mai said the possibility of reducing FDI attraction is currently not a worrisome problem for Vietnam like some other countries, but Vietnam should have more effective solutions to improve the quality of foreign capital. Therefore, it is necessary to improve the human resources skills of industrial park management boards because this is the advisory agency for localities to make decisions on selecting investment projects.