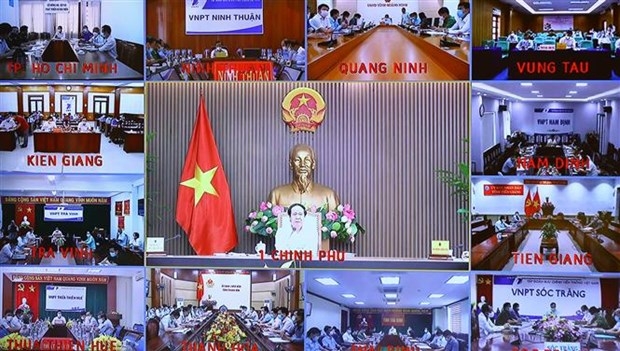 An overview of the meeting (Photo: VNA)

NDO/VNA – The National Steering Committee on Illegal, Unreported, and Unregulated (IUU) Fishing Prevention and Control on July 13 held an online meeting with representatives of 28 coastal localities to discuss measures to continue to combat IUU fishing.

Addressing the meeting, the fifth held by the committee since it was set up in 2019, Deputy Prime Minister Le Van Thanh, head of the committee, underlined the determination to step by step moving towards the removal of the “yellow card,” imposed by the European Commission on Vietnam, thus boosting the development of fisheries sector.

He noted that over the years, Vietnam has concentrated on building a legal system on fisheries to meet the requirements of integration and sustainable development of the sector, which has resulted in improvement of fishermen’s compliance to the law.

However, the Deputy PM pointed out that violations in fishing regulations, though showing decreases, still continue, the seafood origin tracing capacity has remained modest, and infrastructure system of fishing wharfs in 28 localities have received inadequate investment.

He stressed the need to settle the overlapping of regulations and complete the legal corridor in the field.

Deputy PM Thanh called for more efforts from the mass media in popularising relevant regulations and raising fishermen’s awareness in the field.

He requested the 28 coastal localities to work harder in IUU fishing prevention and control and allocate more budget to the activities.

In late 2017, the European Commission issued a "yellow card" warning to Vietnam, after the country failed to demonstrate sufficient progress in the fight against IUU fishing. The commission gave nine recommendations for Vietnam to implement in order to remove the card, which was cut to four after two times of examination in May 2018 and November 2019.

So far, Vietnam has made a number of positive changes in preventing IUU fishing, including installing vessel monitoring systems (VMS) in fishing vessels and building a database on fishing vessels connecting the central to local levels.

According to Deputy Minister of Agriculture and Rural Development Phung Duc Tien, after nearly four years of implementing IUU prevention and fight measures, Vietnam’s efforts have been recognised by the EC. The commission has lauded Vietnam’s goodwill, cooperation, transparency and honest in providing and exchanging information on the results of IUU fishing prevention and control measures.

Tien said that since 2020, due to COVID-19, the EC has not been able to send inspectors to Vietnam, however, the ministry has regularly reported the outcomes of the country’s implementation of the measures to the commissions.

The ministry will strive to cut at least 40 percent in the number of fishing vessels committing violations of foreign waters in 2021 and completely end such violations in 2022.

Participants at the meeting gave a number of ideas to strengthen IUU fishing prevention and control measures, including stricter punishments and the setting up of fishing surveillance teams in localities.