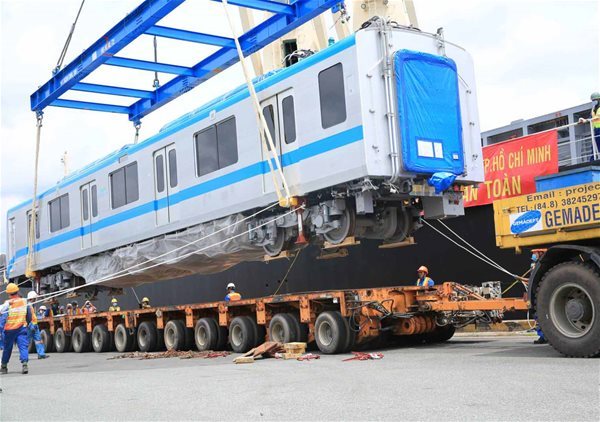 HCMC - Two more trains with three carriages each for HCMC’s first metro line project linking Ben Thanh Market in District 1 with Suoi Tien Theme Park in District 9 are set to arrive in the city on July 13 for the upcoming trial operation.

The Management Authority for Urban Railways of HCMC (MAUR) on July 7 said that the six carriages of the two trains had left the Japanese port for Vietnam two days ago.

After these carriages arrive at the Khanh Hoi Port in District 4, they will be transported to the Long Binh Depot in Thu Duc City on July 15 and 17 for installation.

Each train carriage measures 21 meters in length, four meters in width and three meters in height and weighs 37 tons.

After the two trains arrive in HCMC, the 10 others will also be transported to the city soon, said MAUR.

Between October last year and June this year, five trains arrived in the city and are waiting for a trial operation, which is set to start in the fourth quarter of the year, the local media reported.