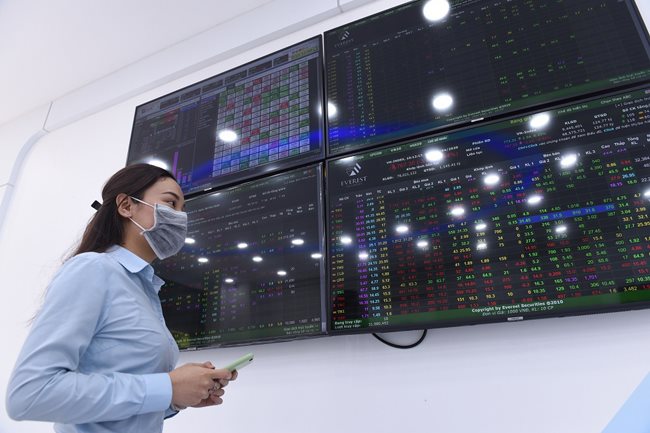 A woman stands in front of an electric board displaying stock prices. The VN-Index of the Hochiminh Stock Exchange bounces back strongly today, July 7 - PHOTO: TNO

HCMC - After taking a nosedive in the session yesterday, the VN-Index of the Hochiminh Stock Exchange bounced back strongly today, July 7, to close at its intra-day high.

Trading volume and value on the southern bourse dipped slightly over the session earlier to 784 million shares and nearly VND27 trillion.

Many bank stocks recovered and some stocks in the VN30 basket hit their ceiling prices, sending the main index up. However, the liquidity did not improved greatly, proving the cautiousness of investors.

As for bank stocks, LPB rocketed to its ceiling price, at VND29,950, while VPB and VIB inched down, and EIB closed at its reference price.

Meanwhile, most of small and medium stocks dropped. Construction firm ROS even plunged to its floor price, at VND5,580.

On the northern bourse, the HNX30 basket saved the HNX-Index from another declining session. The index bounced back slightly at the end of the session after most of stocks on the bourse were traded in the red in most of the trading time.

Securities companies SHS and VND gained 6.28% and 2.8%, respectively, contributing to the rise of the HNX-Index.