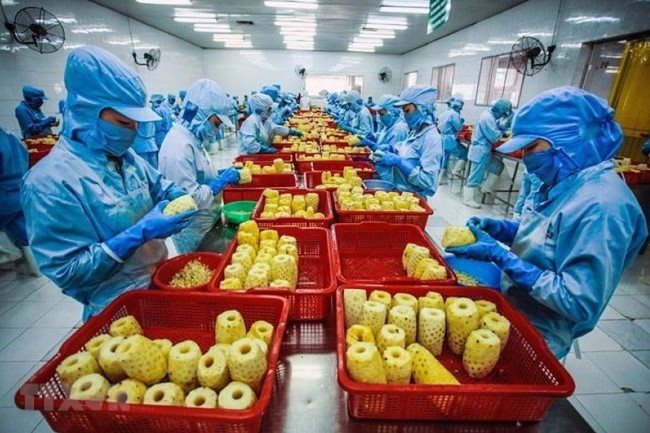 Workers process pineapples for export in the Mekong Delta province of An Giang. Vietnam’s fruit and vegetable exports rose 17.4% year-on-year to reach over US$2.06 billion in the first half of 2021 - PHOTO: VNA

HCMC - Vietnam exported fruits and vegetables worth over US$2.06 billion in the first half of 2021, increasing 17.4% compared with the same period last year, according to the Vietnam Fruit and Vegetables Association.

In June alone, the country exported fruits and vegetables worth US$356 million, surging 38% year-on-year.

On the other hand, the country imported fruits and vegetables worth US$686 million from January to June, falling 16.6% from the same period last year, resulting in a trade surplus of US$1.3 billion.

China, the United States, Japan and South Korea were Vietnam’s biggest fruit and vegetable importers in the year’s first half.

Since early June, the Vietnamese and Chinese competent agencies have reached an agreement to simplify customs procedures for fruit shipments from Vietnam to China.

Nine Vietnamese fruits that have been allowed to be shipped to China via official channels include mangoes, longans, dragon fruits, bananas, watermelons, jack fruits, lychees, rambutans and mangosteen.

Vietnam has suggested the Chinese authorities pave the way for the export of more Vietnamese fruits and vegetables such as sweet potatoes, durian, grapefruit, passion fruit, avocados and coconuts.