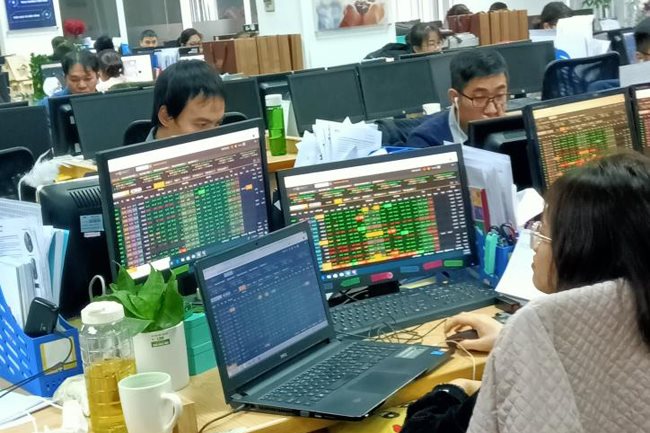 HCMC - Active trading activities on the Hochiminh Stock Exchange today, July 5, helped reduce the loss of the market and the VN-Index stay above the 1,410-point level.

Turnover on the southern bourse improved with volume and value increasing 15.63% and 7.66%, respectively, at 817.33 million shares and over VND28 trillion. Shares traded in block deals contributed more than VND962 billion to the overall value.

A highlight on the southern bourse was lender TCB, which hit its ceiling price before easing slightly at the end of the session. However, it was the best performer among stocks in the VN30 basket and bank stocks as it added 6.8% at VND58,000. Its liquidity also surged with 47.55 million shares changing hands, ranking second on the southern market.

Among lenders, only VCB, BID, CTG and MBB were decliners but their decline was some 1% each.

Besides bank stocks, some stocks in the VN30 basket helped check the market’s fall, such as tech giant FPT and housing developer VHM. Notably, mobile phone retailer MWG soared 6.2% at VND166,500, probably because the company has approved a plan to pay a dividend of 60% both in shares and cash.

Some other blue-chip stocks posted a steep fall, including fuel distributor GAS plummeting 4.8% to its lowest level of the day, at VND92,000, and housing developer NVL and refrigeration electrical engineering firm REE losing 3.4% each at VND115,000 and VND54,800, respectively.

Many other blue-chip stocks also inched down, such as petroleum stock PVC tumbling 5.4% at VND10,600 and trade and investment company TNG decreasing 4.2% at VND22,700.

As for liquidity, lender SHB led the northern bourse with over 35.82 million shares traded.