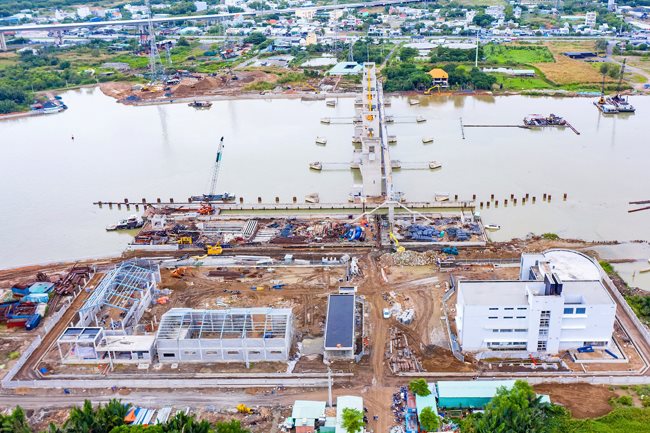 A view of the VND10-trillion anti-flooding project. The prime minister has asked HCMC and the relevant agencies to complete the project - PHOTO: TNO

HCMC – Prime Minister Pham Minh Chinh, at a regular Cabinet meeting on July 1, asked the competent agencies to eliminate the difficulties plaguing the first phase of a tidal flood prevention project in HCMC worth nearly VND10 trillion, with the impact of climate change taken into account, to ensure the project is completed at the earliest.

Earlier, the Government had issued a resolution asking for the continuation of the mammoth project, which was considered an urgent and important one, Thanh Nien Online newspaper reported.

The Government had given its in-principle approval to the proposal of the HCMC government and the relevant ministries, allowing the city to continue the project in line with special mechanisms to ensure socioeconomic benefits for the city and to prevent wastefulness of the resources previously used in the project.

The HCMC government will take full responsibility for the completion of the project, while preventing irregularities, losses and wastefulness of the State capital and assets. It must make payments to the investor, the Trung Nam Group and the relevant enterprises in line with the signed contracts.

The city must also work with the investor on the cost of the project, eliminate unreasonable and illegal expenditures and reach a consensus on the cost, progress and payment requirements to soon sign an appendix to extend the deadline of the project in accordance with the law.

It should later work with the State Bank of Vietnam and the Bank for Investment and Development of Vietnam on the adjustment of loans for the project.

The first phase of the tidal flood prevention project with the impact of climate change taken into account kicked off in June 2016. It was expected to help control flood tides for an area of some 570 square kilometers, with some 6.5 million residents on the right bank of the Saigon River and downtown.

The project was initially planned to be completed in April 2018, but the deadline was delayed to June 2019 as the project was suspended for 10 months.

Work on the project was resumed in February 2019 and the investor had earlier affirmed that the project could be completed at the end of 2019 and put into operation in the first quarter of last year if it received enough of the cleared site. However, the project is only 95% complete.