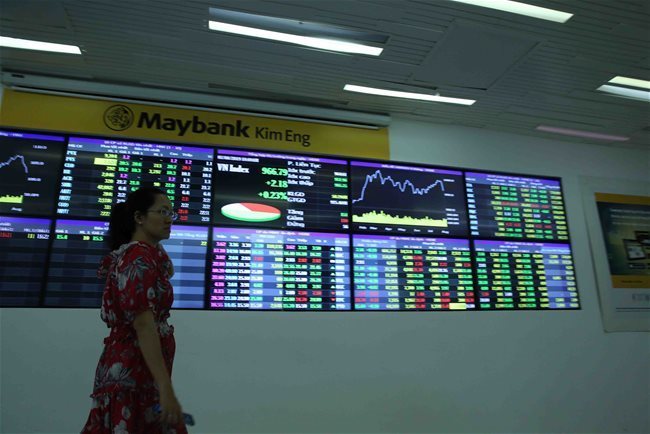 A woman walks past a stock quotation board at a securities company in HCMC in this file photo. The VN-Index of the Hochiminh Stock Exchange grew 0.3% to set a new record of 1,410.04 points on June 29 – PHOTO: THANH HOA

HCMC - A number of bluechips became the cash magnets and helped the VN-Index of the Hochiminh Stock Exchange reach a new high of 1,410.04 points today, June 29.

The benchmark index grew 0.3%, or 4.23 points from the previous session. Although declining stocks outnumbered gainers by 244 to 153, the VN-Index expanded as money was poured into bluechips.

The biggest contributor was housing developer VHM, which rose 2.68% to VND118,600, contributing 2.7 points to the VN-Index.

Lender STB grew 2.65% to VND31,000 and led the southern bourse in terms of liquidity with over 36 million shares changing hands.

Besides VCB and STB, some other bank stocks such as MBB, LPB, EIB and SSB gained ground.

In the group of small and medium stocks, many dipped into the red, including FLC, ROS, PVD, DLG, HSG, FIT, HQC, KBC and ITA.

Furniture company TTF was the second most actively traded stock on the southern market with 27.6 million shares changing hands. However, TTF fell 4.4% to VND7,900 at the close.

On the Hanoi Stock Exchange, the HNX-Index inched up 0.21% to end at 323.79 points, with declining stocks outnumbering gainers by 127 to 95. There were 132.79 million shares worth some VND3.2 trillion changing hands, increasing 4% in volume and 9% in value compared with the previous session.

Under selling pressure, 20 stocks in the HNX30 basket lost ground. However, heavyweights such as SHB, NVB, SHS, LAS, THD and NRC expanded, helping prevent the HNX-Index from falling.

TC6, NBC, TVD, TDN and CTC also shot up to the ceiling prices.

In contrast, most petroleum stocks such as PVS, PVB and PVC performed poorly.