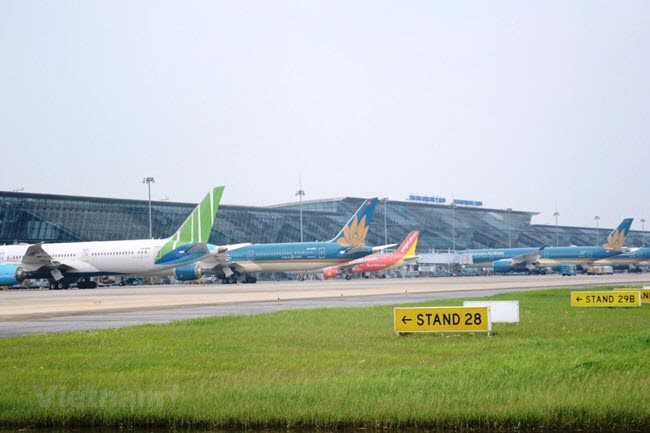 Aircraft operated by local carriers are parked at a local airport. The Ministry of Transport has ordered the suspension of flights linking HCMC with Vinh City in Nghe An Province beginning today, July 2, until further notice to combat Covid-19 – PHOTO: VNA

HCMC – The Ministry of Transport has ordered the suspension of flights linking HCMC with Vinh City in Nghe An Province from today, July 2, until further notice to combat Covid-19 following the province’s proposal.

A representative of the ministry said on June 30 that the Nghe An government had earlier proposed the ministry suspend air services to Vinh airport in the province to serve the Covid-19 fight. However, the Civil Aviation Administration of Vietnam suggested that only flights on the Vinh-HCMC route must be suspended, while air services on the other routes linking Vinh should operate as normal.

After consideration, the ministry decided to temporarily stop flights on the Vinh-HCMC route, except for those carrying medical workers and equipment.

There are five carriers that operate 66 round-trip flights weekly from Vinh to HCMC, Hanoi, Dalat and Phu Quoc. Each month, the Taiwanese low-cost carrier Tigerair Taiwan operates one flight transporting experts to Vinh. Between June 30 and July 6, four carriers were scheduled to offer services on the HCMC-Vinh route, with three-four daily flights.

Earlier, other localities such as Quang Binh, Haiphong, Quang Ninh and Gia Lai had been given the green light to suspend flights to/from HCMC over fears of the coronavirus. At present, the HCMC-based Tan Son Nhat airport is offering services on 13 routes to other local destinations.

HCMC is currently the second biggest coronavirus hotspot in Vietnam during the current wave, with 4,422 cases reported as of this morning. Meanwhile, Nghe An has reported 105 cases up to now.