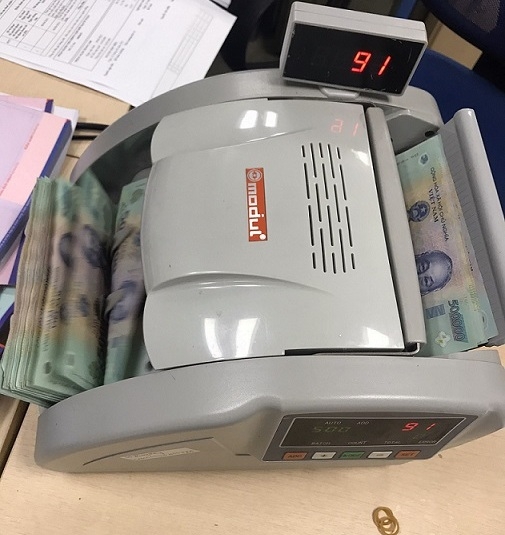 Despite big spending on medical treatment and supporting production and business, the state budget is expected to see a surplus

NDO - Though the ongoing health crisis has seen major expenditure from the state budget in support of medical treatment and domestic production, the first six months of the year is expected to see a surplus in the state coffers, illustrating the gradual recovery of business activity.

The government has just reported to the National Assembly Standing Committee that in 2020, the state used VND21.1 trillion (US$917.4 million) to fight the COVID-19 pandemic, protecting the public’s lives.

In addition, the state has also earmarked more than VND14.5 trillion (US$630.43 million) for purchasing vaccines against COVID-19. It is expected that another US$1.1 billion will be needed to buy sufficient vaccines in order to inoculate all in the country.

In the first five months of this year, the government extended tax payment and land rental payments worth VND21 trillion (US$913 million), while decreasing and exempting taxes and fees worth VND2.46 trillion (US$106.9 million). This has helped many firms and people ease their difficulties and maintain their production and business activity.

The government predicts that total state revenue in June will be as much as VND77 trillion (US$3.34 billion), lifting the total figure for the first half of this year to more than VND744.9 trillion (US$32.4 billion). This will mean a budget surplus.

The government explained that in the first six months, state budget revenue is estimated to be 55.5% of the initial estimate as the VND77 trillion (US$3.34 billion) in June would mean a reduction of VND22 trillion or -21.9% as compared to May due to the pandemic and the continued reduction and exemption of a number of fees .

Meanwhile, the government has also reported that state budget spending in the first half of 2021 is estimated to be 43% of initial estimates, in which expenditure for investment development is estimated to reach 34.1%, with recurrent spending at about 48.5%.
The Ministry of Finance reports that in the first five months, there was a surplus in the state budget of VND86.57 trillion (US$3.76 billion) thanks to a rise in revenue created by an increase in domestic business and production activities.

In another case, the state-owned Vietnam Oil and Gas Group (PetroVietnam) also reported that its total revenue in the first five months totalled about VND227.3 trillion (US$9.88 billion), climbing 16% year-on-year, with the group contributing VND32.4 trillion (US$1.4 billion) to the state coffers, up 20% year-on-year.

PetroVietnam’s total gross output is calculated at VND142.36 trillion (US$6.19 billion), up 17% year-on-year. Of this, exploitation of crude oil and gas swelled by 28%, production of refined oil products increased by 17%, production of chemical products ascended 15%, while production and distribution of electricity and gas went up 6%.

Meanwhile, also in the first five months of this year, state-owned Electricity of Vietnam’s (EVN) total industrial gross output hit over VND147 trillion (US$6.39 billion), an 8.06% rise as compared to the same period last year. Electricity produced and purchased is calculated to have reached more than 99.9 billion kWh, increasing 7.11% year-on-year.

According to the General Statistics Office, in the first five months of 2021, the Vietnamese economy’s production and distribution of electricity climbed 8.3% in comparison with a year-on-year rise of merely 2.1% in the corresponding period of 2020.

The economy’s index for industrial production in the first five months is estimated to increase by 9.9% as compared to only 1% in the same period last year.

Notably the manufacturing and processing sector, rose by 12.6% in comparison with a mere 2.2% in the corresponding period of 2020.

Prime Minister Pham Minh Chinh said that the government will consider and enact a resolution on policies to assist employees, employers, and businesses negatively affected by COVID-19.

PM Chinh has asked the Ministry of Labour, Invalids, and Social Affairs (MoLISA) to complete a draft of this solution based on ideas and feedback from government members. He also ordered the MoLISA to draft a proposal on promulgating this resolution. The draft proposal must cover many specific points such as the beneficiaries, support conditions, assistance scopes and time, funding sources, and total support sum.

The proposal will be submitted to the Politburo for consideration and approval.

Since the second quarter of 2020, the government has also been deploying some major solutions to assist enterprises. For example, the State Bank of Vietnam has applied a support package worth VND180 trillion ($7.82 billion) for businesses and households, in the form of debt payment deferral and preferential loans.

Most recently, this April, the government issued Decree No.52/2021/ND-CP on an extension of time limits for the payment of VAT, CIT, personal income tax, and land rental in 2021. The total size of the package is estimated at VND115 trillion ($5 billion).

Experts say once the fresh policies of the government and the legislature are in full force, there will be a big dent in the state budget as the country will need dozens of billions of US dollars for its fight against COVID-19 and in its supporting of enterprises.

Thus, if Vietnam borrows more, the country’s efforts to control public debt may be affected. However, the government needs to make thorough considerations before making a decision on borrowing internationally .

The government recently sent a report on the national budget to the legislative body, stating that as of late 2020, the economy’s public debt was equivalent to 55.3% of GDP, of which foreign debt made up 47.3% of GDP, lower than the cap assigned by the NA in the financial plan for the 2016-2020 period.

The government’s debt decreased from 52.7% of GDP in 2016 to 49.6% by late last year, creating more room for fiscal policy adjustment.

“A lower debt level will require more fiscal consolidation. Looking ahead, Vietnam will need to create more fiscal space for infrastructure development, large demand for health care and education, climate change mitigation and adaptation, and demographic challenges,” according an expert from the Asian Development Bank. “In the context of tariff reductions due to Vietnam’s commitments in various free trade agreements and the decrease of revenue from oil which may affect the government’s revenue, official development assistance and concessional lending therefore remain critical finance sources for Vietnam to maintain its strong growth momentum which in turn provides more opportunities to reduce public debt and improve the quality of fiscal consolidation”.

The prime minister has approved the public debt management programme for the 2021-2023 period.

Under the programme, total borrowing over the next three years will be VND1.74 quadrillion (US$75.65 billion), of which VND1.6 quadrillion (US$69.56 billion) will go into the central budget.

The local budget spending deficit is to be limited at 0.2% of GDP, as stipulated in the 2015 Law on State Budget, and the debt repayment obligation of local government is approximately VND18.4 trillion (US$800 million).

With regards to foreign commercial loans by enterprises and credit institutions, the growth rate for short-term credit is capped at 18-20%, per year and net maximum medium-term and long-term loans are around US$6.35-7 billion per year.