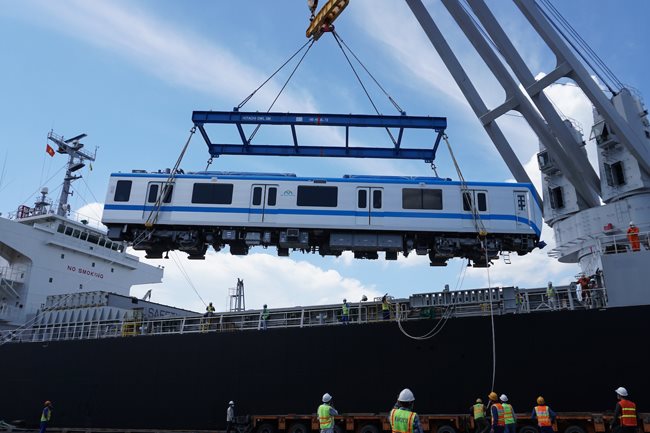 A train car of HCMC’s metro line No. 1 is unloaded from a vessel to a tractor-trailer to be transported to Long Binh Depot – PHOTO: MAUR

According to the Management Authority for Urban Railways of HCMC, they are the fourth and fifth trains out of the 17 trains of the urban rail line to be shipped to HCMC.

After completing customs procedures at the port, the fourth train was transported to Long Binh Depot in Thu Duc City today, June 21, while the fifth will be placed on the T1 track in the depot on June 23, the local media reported.

The arrival of the two trains amid the Covid-19 pandemic has accelerated the progress of the city’s first metro line project and its trial operation.

HCMC’s metro line No. 1 will have 17 trains, including three-car trains capable of carrying 930 passengers and six-carriage ones, all manufactured in Japan. The five trains which have arrived in Vietnam are all three-car trains.