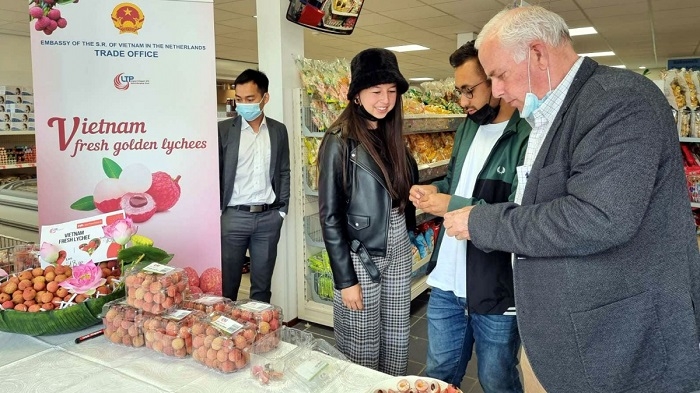 Vietnamese lychees confident of winning over consumer taste in Netherlands

NDO/VNA – Fresh lychees from Vietnam have hit the shelves of a supermarket in the Netherlands and received warm response, expecting to make further inroads into this market in the time ahead.

To advertise Vietnamese lychees, the trade office of Vietnam in the Netherlands and the LTP Import Export BV company have organised a tasting programme at Thanh Hung Supermarket in Spijkenisse city.

The fruits for sale at this supermarket come from the batch of nearly 1 tonnes of lychees that were farmed in Thanh Ha district, Hai Duong province, and arrived at Schiphol Airport on June 17 for distribution to Asian supermarkets in the Netherlands, France, and Germany.

Earlier, the sample lychees had been sent to all Asian supermarkets in the Netherlands and won over great interest from their owners.

As a result, lychee orders from supermarkets in the Netherlands, France, Germany, and Norway, for between hundreds of kilogrammes and one tonne each, have been made, and the batches are scheduled to be shipped by air in the next one or two weeks.

Vo Thi Ngoc Diep, Trade Counsellor of Vietnam in the Netherlands, said this is the first time fresh lychees of Vietnam have been imported via an official channel to the Netherlands, from which the fruit will be distributed to neighbouring countries.

With those encouraging signs, Vietnamese lychees will hopefully continue making further inroads into the Dutch market in the coming years.

Apart from the Netherlands, the fruit has also been successfully exported to France, Japan, and the Czech Republic, among others, which all have strict requirements for imported products.