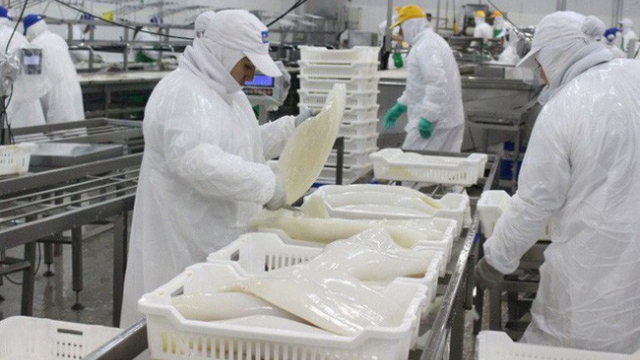 Vietnam's squid and octopus exports to China remain on the rise. (Photo: VASEP)

NDO/VNA – Vietnam has recorded continual growth in squid and octopus exports to China over the last three years, according to the Vietnam Association of Seafood Exporters and Producers (VASEP).

Shipments of these commodities to China last year rose by nearly 61% from 2019 and by 21 percent year on year in the first four months of 2021 to more than US$9.7 million.

Thanks to the COVID-19 pandemic partly contained in China, this country has gradually eased restrictions, helping to recover demand for mollusc imports, VASEP said, noting that squid and octopus products remain one of Vietnam’s key aquatic exports to the neighbouring market.

Vietnam shipped almost US$3.3 billion worth of aquatic products abroad in the first five months of 2021, up 14% year on year.

Up to 60%, or nearly US$2 billion, of the revenue was contributed by the 13 Mekong Delta localities while six others in the southeastern region made up 18%, US$602 million, VASEP reported.

Between January and May, overall agricultural exports to China posted impressive growth with shipments of some produce even matching or surpassing the corresponding figures for the entire 2020, according to the Plant Protection Department under the Ministry of Agriculture and Rural Development.

Hoang Trung, Director of the Plant Protection Department, said China has long been the main importer of farm produce from Vietnam, and it will remain the largest buyer of Vietnamese agro-forestry-fishery products in the time to come.