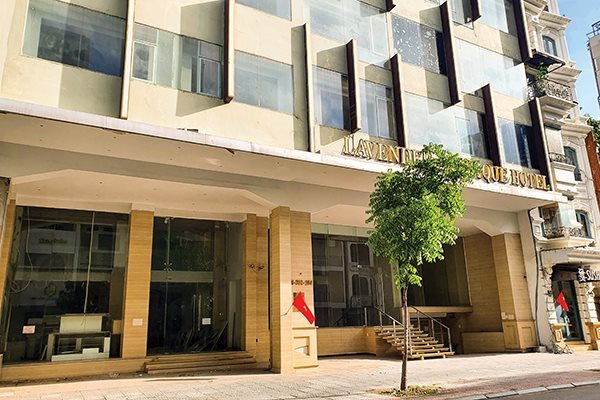 A hotel on Ly Tu Trong Street in HCMC. As the Covid-19 pandemic continues to develop complicatedly across the country and severely affect the hotel industry, even hotels that persevered for over a year with hardly any guests have eventually resigned to their fate and are preparing to shut down - PHOTO: DAO LOAN.

HCMC – As the Covid-19 pandemic continues to develop complicatedly across the country and severely affect the hotel industry, even hotels that persevered for over a year with hardly any guests have eventually resigned to their fate and are preparing to shut down.

Before the Covid-19 pandemic, travel reporters would occasionally remind each other of an old colleague’s gaffe for a few laughs and as a reminder of the caution required in their profession. In the story, the reporter gave the operators of a luxury hotel in HCMC a “fright” via an article he wrote about the hotel’s “sluggish work pace” when in reality, the hotel was filled.

On further probing, the reporter revealed that he did not actually interview the hotel’s authorities but instead made his conclusions based on the number of rooms lit up in the night. On the day he observed the rooms, only a few of the 500 rooms were lit up, which led him to believe the hotel was not doing very well, when in fact, the hotel’s occupants were actually out and about, touring the city.

“Do you remember the story? Today, you can actually judge a hotel based on how many rooms are lit up. So many hotels have gone dark because there are no customers,” a person in charge of a luxurious hotel in central HCMC told the Saigon Times just a few days before a 15-day lockdown was announced in the city to prevent the spread of the pandemic.

Dark times ahead for hotels?

As the SARS-CoV-2 infections in the city began to surge, room occupancy at the luxurious hotel was at 2%. Conference rooms, restaurants, coffee shops, along other services were also shut because of the city government’s suspension order. One day before the lockdown, the hotel’s capacity even dropped to zero.

The fourth surge, especially the outbreak in HCMC, has quashed hopes about the domestic market's growth in the summer and any chances of welcoming international tourists back at the end of the year.

Businesses resign to their fate.

A fortnight ago, the Center for Disease Control in HCMC reported a chain of Covid-19 infections linked to a religious group, which kickstarted a series of infections in HCMC. Speaking to Saigon Times about doing business in the fourth wave, some businesspeople said they are contemplating renting or selling their hotels.

There has been an underground wave of buying and selling hotels in HCMC and other tourist attractions such as Dalat, Vung Tau, etc. The number of listings, especially by small to medium hotels, is increasing gradually, but few places publish actual transactions for the market's overall assessment.

However, in hotel rentals, especially for hotels with a few dozen rooms, information about the declining conditions can be clearly seen. Rental prices at various spots, including prime locations in HCMC, have dropped by more than half, and tenants are still at bay.

The “tsunami” of hotels shutting down during this surge is having the biggest impact on workers, especially those working in low-level positions. Around last April, while the entire nation was carrying out social distancing, HCMC’s Department of Tourism reported that of the 28,000 workers in accommodation establishments, up to 19,587 people had to stop working temporarily, 830 people quit, while the rest were asked to take unpaid leave. As of this moment, there has been no official report on the number of hotel workers who have lost their jobs after four Covid-19 waves, but many businessmen said this number is only set to increase.

Will the hotel industry light up again? Only time will tell.