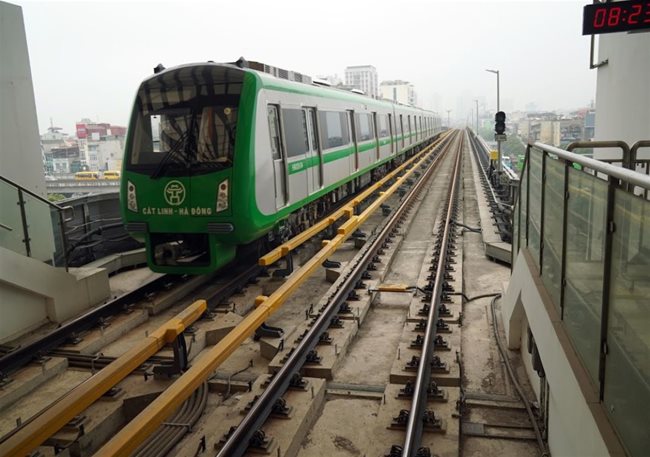 A train of the Cat Linh-Ha Dong railway system. The Ministry of Transport affirmed that these recommendations from a French consulting firm about the safety of Hanoi’s railway project were given in the initial period of safety evaluation, and the project was issued a safety certificate by the consulting firm in late April - PHOTO: TNO.

HCMC - Responding to news about the recommendations from Apave-Certifier-Tricc (ACT), a French consulting firm, over the safety of the Cat Linh-Ha Dong urban railway project, the Ministry of Transport said that these recommendations were given in the initial period of safety evaluation. The project was issued a safety certificate by the consulting firm in late April.

The State Council for Acceptance of Construction Works is checking the project, the first-of-its-kind in Hanoi City, and accepting the results of the evaluation, so that it can be handed over to the Hanoi government for commercial operation, according to the ministry.

In late April, the Railway Project Management Board under the Ministry of Transport and Metro Hanoi Co., Ltd completed the handover of documents and checked the project's assets.

The ministry, the Hanoi government, and the relevant units coordinated overacting the safety recommendations of the French consultant.

ACT had earlier presented 16 recommendations on the risks of the safety of traction systems, electric brake systems, and poor readiness of staff in emergencies. In addition, ACT said that the Chinese contractor did not provide sufficient documents related to the safety of the rail line's operations, while the fire system and the viaduct system were yet to be guaranteed safe.

When testing 10 emergency procedures of the metro line, eight failed, according to the consulting firm.

ACT said that if the project is put into operation, the investor must accept the safety risks and other consequences, the local media reported.

The project was certified as safe by the Vietnam Fire and Rescue Police Department, while Metro Hanoi Co. tackled 64 procedures for handling emergencies and additional signposts for disabled people.

The 13-kilometer Cat Linh-Ha Dong metro line project has 12 stations and 13 trains with four cars each.