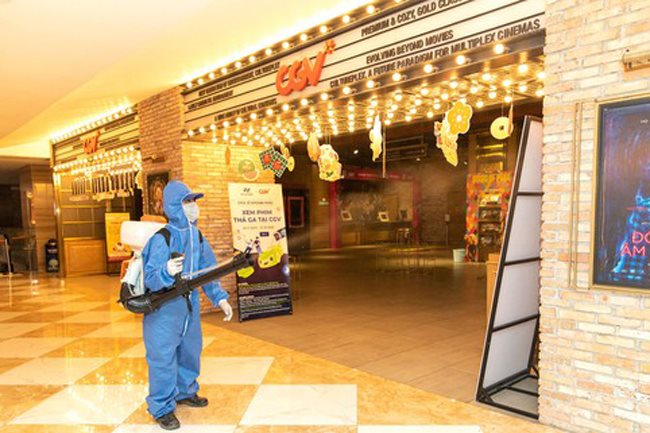 A CGV cinema is disinfected. Large cinema companies have asked for the prime minister’s help to overcome the difficulties caused by Covid-19 - PHOTO: SGGP

HCMC – Large movie theater chains in Vietnam, such as CGV, Lotte, Galaxy and BHD, have requested the prime minister for urgent help to cope with difficulties triggered by the Covid-19 pandemic.

With Covid-19 raging in the country at the moment, all the cinema chains have been closed.

The period of 2010-2020 has seen a strong surge of movie theater chains in the nation. Data showed that the number of modern cinemas in the country has edged up from 90 to nearly 1,100 in the past decade, with moviegoers shooting up from seven million to 57 million.

However, since late January last year, the cinema chains have been on and off because of coronavirus outbreaks.

At present, movie publishers and distributors have earned no revenue, while they still have to shoulder space leasing costs and payrolls.

If the situation continues, they would certainly go bankrupt, sending the entire film industry into a tailspin.

Acknowledging the Government’s efforts to curb the pandemic, they urged the Government and other relevant agencies to work out support policies for them.

They proposed considering the reopening of cinemas early to prevent employees in the sector from losing their jobs. They committed to complying with anti-virus measures after resuming operations.

They affirmed that cinemas can easily put in place these measures as customers will focus on the films and have no time to talk with others. Their seating distance can be ensured and they do not need to gather in ticket boxes to buy tickets as clients can book e-tickets.

In addition, they suggested the Government issue policies to restructure loans or come up with new preferential credit packages. The deadlines to pay social, health and unemployment insurance premiums as well as labor union fees should be extended until December 31.

They also proposed halving the value added tax and delaying the payment of the tax until December 31 as well and reducing or exempting the personal income tax for their employees.

The Government should call on real estate enterprises to facilitate space lessors to reduce or exempt the rentals and service fees for cinemas during their suspension period and at least six months after their resumption.

They proposed the Government recognize movie publishing as an essential service. In the current scenario, the service should be encouraged to reduce mental stress and ease the pressure on the healthcare sector.

In April last year, the Vietnam Cinema Association also sought the prime minister’s help for local cinema companies, stressing that their financial capacity was not as strong as that of foreign ones, such as CGV and Lotte Cinema, to deal with the pandemic.