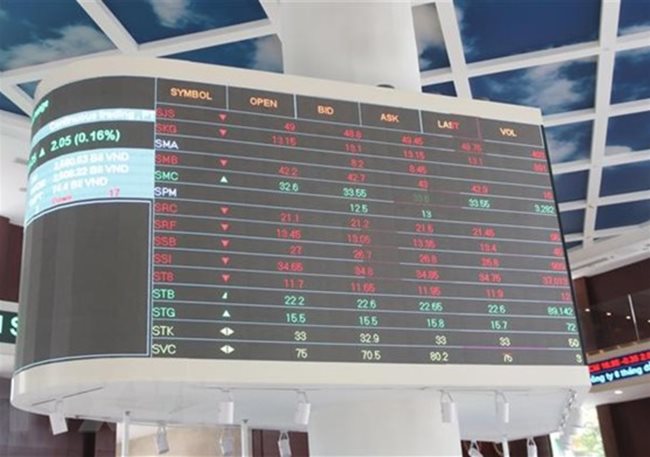 An electronic board shows stock prices at the Hochiminh Stock Exchange. The VN-Index surged to an all-time high of 1,328.05 points on Monday - PHOTO: VNA

HCMC - Financial stocks, especially bank and securities stocks, were the cash magnets today, May 31, pushing the VN-Index of the Hochiminh Stock Exchange to an all-time high of 1,328.05 points.

Bank stocks were among the most actively traded stocks on the southern market. STB had 42.13 million shares changing hands, while VPB and MBB had over 30 million shares traded each.

HSG shot up to the ceiling price at VND52,700 and took the lead in terms of liquidity with 60.3 million shares changing hands.

There were 102 gaining stocks and 125 decliners. The northern bourse saw over 186.2 million shares worth VND4.36 trillion changing hands.

The major contributors were bank, securities and petroleum stocks.

Many securities stocks and some petroleum stocks such as PVS and PVS shot up to the ceiling prices.

SHB was the most actively traded stock on the northern bourse with 40.92 million shares changing hands, followed by PVS with 25.88 million shares.