Home / Business
US market attracts Vietnamese enterprises
duonghanhnguyen 20-05-2021, 18:06
In the first four months of this year, export turnover to the US market had continuously seen sharp increases, maintaining the growth of over 20 percent over the same period. This is not beyond the expectation of enterprises. Besides the advantages that Vietnamese enterprises have got in their hands, the commercial counselor of the Vietnam Trade Office in the US also warned that this market is containing many great risks. 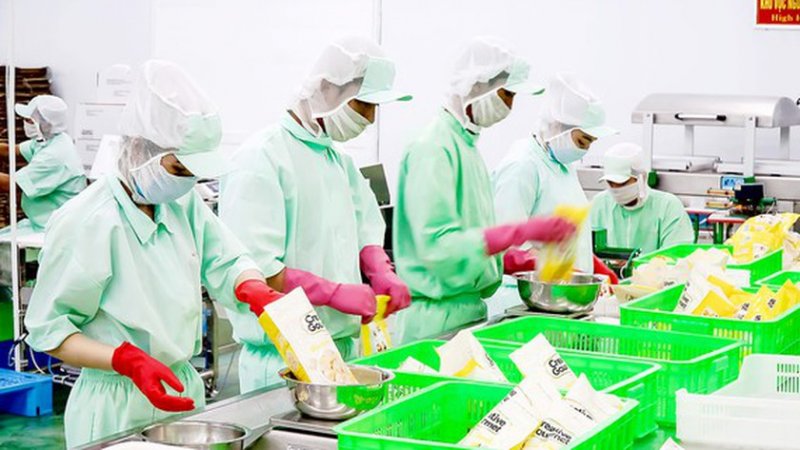 Analyzing the export market structure, the Ministry of Industry and Trade said that the US is a potential export market and also a key market that Vietnamese exporters are heading for.

In the first four months of this year, the export turnover of Vietnamese goods to China reached US$16.8 billion, up 32.4 percent. Exports to the EU market, after prolonging the downward trend in 2020, jumped to $12.6 billion, up 18.1 percent, at the beginning of this year. In addition, in other markets, such as the ASEAN, South Korea, and Japan, exports also posted good growth rates, up 13.3 percent, 12.1 percent, and 1.5 percent respectively. However, for the US market, export turnover hit $30.3 billion, up 50.1 percent year-on-year, helping the US become the largest export market of Vietnamese enterprises.

According to Ms. Julie Hundersmarck, US Forest Service, among wood products imported from other countries, wood products imported from Vietnam are favored most by US consumers, focusing on products, such as sofas, beds, furniture for children's rooms, entertainment rooms, dining rooms, and kitchens. In 2018, the export turnover of kitchen cabinets to the US market merely reached $140 million. Meanwhile, in 2020, the export turnover topped $1 billion. Ms. Julie Hundersmarck said that although Vietnam's wood export turnover to the US market has climbed sharply, in comparison with the demand of this market, it remains modest. In 2020, the revenue of furniture products in the US reached $115 billion. This figure will surge to $143 billion in about the next five years.

Regarding the above matter, the Vietnam Trade Office in the US shared that the structure of Vietnam's export goods in recent years has changed remarkably. Besides the traditional commodities, such as textiles, footwear, and seafood, manufactured goods, such as electronics, components, and furniture, have also risen to the top position. Currently, more than 10 groups of goods exported to this market have seen export turnover exceeding $1 billion.

However, along with the impressive export turnover, domestic enterprises also have to face many risks of trade remedies and barriers to food safety and product quality.

The most significant technical barrier is the rules of origin. Depending on each group of products, the origin of production materials will be different. For instance, for wood products, wood must be derived from plantation forests. Or for the textile industry, garment products must ensure the “yarn forward” rule of origin to enjoy preferential tariffs. As for the group of agricultural, aquatic products, and processed foods, they must comply with the regulations on food safety and hygiene prescribed by the US Food and Drug Administration (FDA). Currently, the rate of goods inspection applied by US authorities is 1-2 percent per the total order. However, if violations are detected, not only will the total order of the enterprise be returned, but it might also affect the entire manufacturing industry. Not only that, the standards and technical barriers of the US market often change, requiring enterprises to constantly change to adapt. Therefore, if enterprises do not have modern production technology and strong enough internal resources, it is very difficult to keep this market in the long run.

According to Mr. Do Xuan Lap, Chairman of the Vietnam Timber and Forest Products Association, the increase in exports to the US market also means that the government of this country will increase trade remedy measures. Currently, most wood manufacturing and processing enterprises in Vietnam are not pure Vietnamese enterprises but FDI enterprises. Many of these enterprises come from countries and territories that have been imposed safeguard duties by the US. Therefore, the risk of domestic enterprises being involved in the misfortune of the imposition of safeguard duties is extremely high.

In fact, this has happened to the steel industry. Accordingly, when countries, such as Canada, Australia, and the US, importing steel from Vietnam, discovered that many Korean enterprises which were previously levied duties in South Korea, moved their plants to Vietnam to avoid being punished. Immediately, the governments of these countries imposed anti-dumping duties of up to more than 400 percent on the entire Vietnamese steel industry. This also means that the doors of Vietnam's steel industry in these potential markets are officially closed.

Moreover, the protection of enterprises' trademarks in the US market has not been given due attention by Vietnamese enterprises. According to the United States Patent and Trademark Office (USPTO), Vietnam currently has only 1,938 out of nearly 7,000 trademarks, which have been exporting to this market, registered for trademark protection with the USPTO. Of these, only 1,090 trademarks currently exist. As a result, several disputes on Vietnamese trademarks have occurred, and the disadvantaged ones are Vietnamese enterprises.
Obviously, the US has always been the largest import market in the world and will continue to hold the leading position for many more years. Vietnamese enterprises will have to compete with rivals from all over the world. “Therefore, domestic enterprises need to diversify export markets and should focus more on the markets of Europe, Australia, and Canada. It is estimated that Vietnamese goods only account for about 2 percent of the import market share of these above markets. Therefore, Vietnamese enterprises should not “put their eggs in one basket" to avoid the risks of trade remedies, as well as the disruption of export orders when there is a trade dispute,” said Mr. Bui Vuong Anh, Commercial Counselor of Vietnam in Germany, commented.