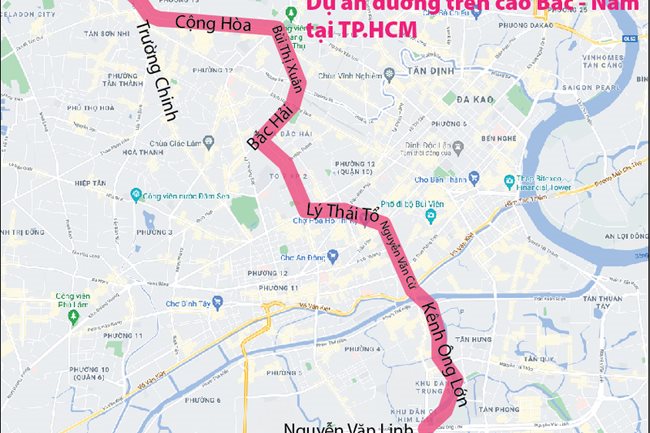 A map shows the direction of the elevated road project which will stretch from the intersection of Cong Hoa and Truong Chinh streets in Tan Binh District to Nguyen Van Linh Street in District 7 - PHOTO: PLO

HCMC – The HCMC Infrastructure Investment JSC (CII) has proposed developing an elevated road stretching from an intersection of Cong Hoa and Truong Chinh streets in Tan Binh District to Nguyen Van Linh Street in District 7, which requires an estimated investment of VND30 trillion.

The HCMC Department of Transport has sent the proposal to the municipal government, stating that it is in line with the city’s approved plan to develop its traffic infrastructure.

The road will connect parts of the elevated road Nos. 1, 2 and 3 to the Ring Road No. 2, or the north of the city, the Tan Son Nhat International Airport area, the downtown area and the Saigon South Urban Area.

The 14.1-kilometer road was designed to run along the Cong Hoa and Bui Thi Xuan streets, Valley 656 of Cach Mang Thang Tam Street, Bac Hai, Ly Thai To and Nguyen Van Cu streets, the Ong Lon Canal and end at an intersection with Nguyen Van Linh Street. It will have four lanes and was proposed to be executed under the public-private-partnership (PPP) model with a build-operate-transfer (BOT) contract.

According to the HCMC Department of Transport, due to the tight city budget, the proposed investment model is appropriate, so it suggested two plans to develop the project.

Under the first plan, the Department of Transport will coordinate with the relevant agencies to prepare the prefeasibility and feasibility reports and hold a tender to choose the investors for the project.

As part of the second plan, the Department of Planning and Investment will instruct the investor to develop the project under the PPP format in line with the law.

Infrastructure Development Investment JSC has proposed using its capital to study the investment in the first phase of the elevated road No. 5 project under a BOT contract. The 21.5-kilometer road will have four lanes and start at an intersection with the Hanoi Highway in Thu Duc City and end at the An Suong Intersection in District 12.

The project, which requires an investment of over VND15.4 trillion, was planned to be executed in the 2021-2030 period.

According to the city’s traffic development plan approved by the prime minister, HCMC must complete the development of the five elevated roads with a total length of 70.7 kilometers by 2020 at the latest. However, no projects have been executed since they were planned in 2005.