Home / Business
Falling prices of sweet potatoes in Mekong Delta leave farmers crying
ChandraGarran04 18-05-2021, 16:07
Many sweet potato farmers in the Mekong Delta have been fidgeting lately because the vegetable price has dropped dramatically and a few people buy it. The falling prices have left farmers crying.
The gloomy atmosphere has spread in vast fields of sweet potato for export in communes Phu Long, Hoa Tan, and Tan Phu in Dong Thap Province in these days because farmers have been unable to find buyers. 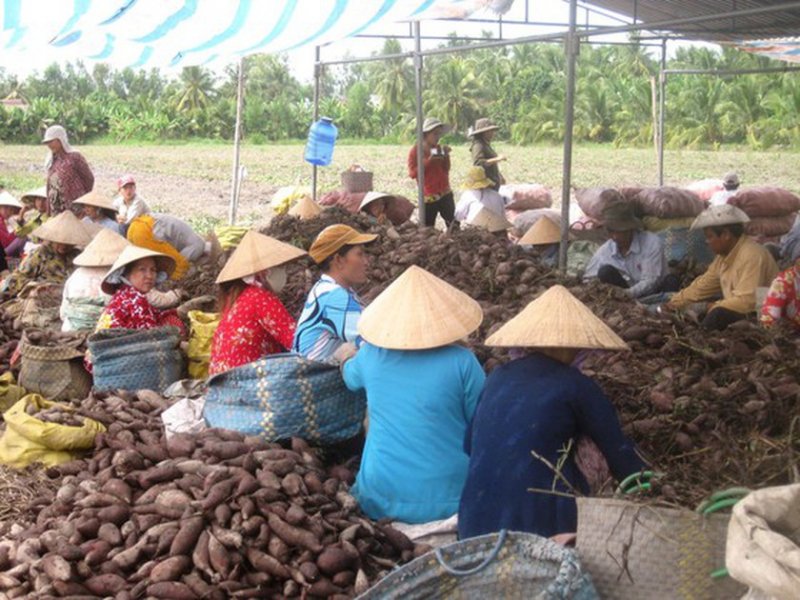 Falling prices of sweet potatoes in Mekong Delta leave farmers crying
For many years, there has been a paradox of plenty in agriculture that a bumper crop reaped by the farmers brings a smaller total income to them. The fall in the income or revenue of the farmer as a result of the bumper crop is due to the fact that with greater supply the prices of the crop decline drastically. More often than not, farmers are unable to assess market conditions and anticipate recovery of falling prices. A lot of agricultural products are displayed at reasonable prices in supermarkets and trade centers in Ho Chi Minh City whereas scores of vegetables and fruits are piled up streets everywhere waiting for consumers. In general, farmers across the country cry bitterly because they are unable to sell the harvested produce in the market; yet, meanwhile, their peers feel secure because their products are bought all. Nguyen Van Huynh, Chairman of Dong Tan Assembly Association in Chau Thanh District moaned before the Lunar New Year 2021, the price of Japanese purple sweet potato was bought at VND1 million per quintal (1 quintal = 60kg) by traders to export to the Chinese market, so farmers enjoyed a big profit. However, after Tet holiday (the Lunar Nee Year) until now, the price of the potatoes continuously dropped to VND600,000 per quintal, and then VND400,000 per quintal. Worse, from April 2021, per quintal costs more than VND200,000 and to VND70,000-VND90,000 in these days. At the current price, sweet potato farmers suffered a big loss. According to Mr. Huynh, farmers in Phu Long commune alone have kept about 20ha of sweet potatoes; while the crop needs to be harvested completely in a few weeks to sow the autumn-winter rice. Farmers grow approximately 3,400ha of sweet potatoes for export and domestic consumption in Chau Thanh District in Dong Thap Province. However, the current low potato prices have pushed many farmers to live in difficulties. According to Chau Thanh District People's Committee, the price of sweet potatoes dropped due to difficulties in the Chinese market In recent days, people in Cu Yang commune, Ea Kar district, in the Central Highlands Province of Dak Lak have fallen in despair because traders refused to buy their pumpkin forcing farmers to sell at an agreed-upon rate. Along the main road to the commune, piles of pumpkins are seen in front of people's houses. Farmer Pham Thi Luu said her family harvested more than 20 tons. Traders disapproved to purchase the vegetable pressing the price to VND1,200 a kilogram while it was more than VND3,000 a kilogram last year. Chairman of Cu Yang Commune People’s Committee Nguyen Manh Hung said that farmers are the worst hit due to the coronavirus lockdown, unable to harvest crops and sell the harvested produce in the market. Around 2,000 tons of pumpkins have been harvested in the commune but no buyers want to purchase them. The local authorities are calling for assistance from enterprises, supermarkets, and residents to buy the vegetable so that farmers can earn their living. Elsewhere farmers in the northern provinces of Bac Giang and Hai Duong feel secured while harvesting lychees because the Ministry and departments in the agriculture sector have adopted measures to help them to sell the fruit. Director of Plant Protection Department Hoang Trung said that the Department has directed plant quarantine divisions to closely to keep an eye on the actual situation to promptly announce changes in exporting to China which may affect the customs clearance. The Department also requested the establishment of a plant quarantine force to inspect exported agricultural products with the aim to curb congestion at the border gates. Moreover, related agencies take heeds of export lychee to the US and Japan. Thieu lychee grown in Luc Ngan District in the Northern Province of Bac Giang has been granted a certificate of geographical indication from Japanese authority offering opportunity for export and consumption of the fruit in the world markets To help farmers, lychees from the northern provinces of Bac Giang and Hai Duong are now officially on sale on one of Vietnam’s leading online marketplaces, Lazada, from May 15. Hai Duong Provincial People's Committee today coordinated with the Ministry of Industry and Trade and related agencies to organize a virtual conference to connect and promote the consumption of Thanh Ha lychee and typical agricultural products of Hai Duong province. The virtual conference connected with domestic and foreign traders in the UK, Australia, Belgium, Germany, the Netherlands, Korea, Hong Kong, USA, Japan, France, Singapore, and China With bumper harvests, farmers are forced to sell the stocks to middlemen for a pittance or let them go to waste. Better integration of markets, development, and maintenance of storage facilities could help avoid this problem.