Home / Business
Lacking raw material sugarcane, domestic sugar industry tumbles
duonghanhnguyen 18-05-2021, 09:38
The remaining sugarcane material area in Vietnam is about 127,000 hectares. The sugarcane growing area is about 100,000 hectares, and the rest is at risk of converting to other crops. Although the 2020-2021 sugarcane crop is considered a successful crop for both farmers and sugar refineries, the sugarcane growing area in many raw material areas is forecasted to continue to shrink. Lacking raw materials, the sugar industry is facing several difficulties. 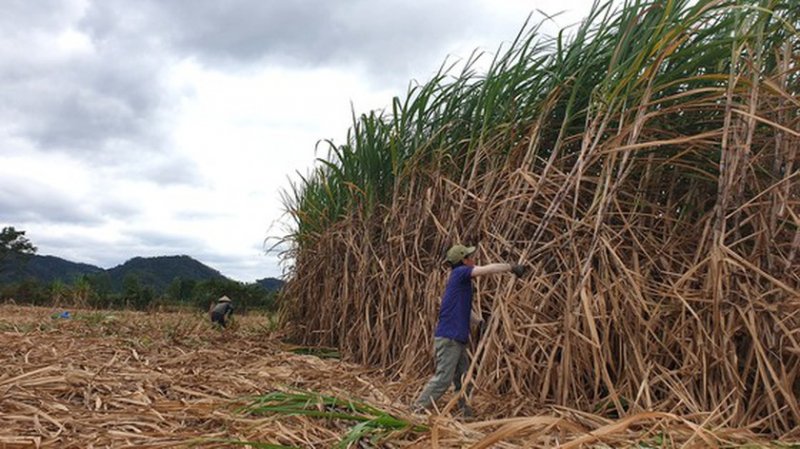 Sugarcane growing area is expected to continue to decrease although the price of sugarcane is high and continues to climb. (Photo: SGGP) According to reports of sugar refineries, in the 2019-2020 sugarcane crop, the number of active sugar refineries was 29. Up to now, in the 2000-2021 crop, only 26 factories remain in operation, because of a shortage of raw materials to maintain full capacity.

In previous years, sugarcane was considered a cash crop thanks to its adaptability and high economic efficiency. Along with diverse uses in many industries, sugarcane gradually determined its stability. However, with competition from other crops, the stability of sugarcane was placed behind the short-term returns of other riskier seasonal crops.

In the 2020-2021 crop year, although the price of raw sugarcane increased by about 200,000 VND/ton compared to the previous crop year, it was still a difficult year for the sugar industry, due to the lack of planting area, the serious shortage of domestic supply of sugarcane, farmers continued to switch to other crops, leading to a decrease in sugarcane output.

Price is considered an important reason affecting the decision to grow sugarcane of farmers. In its heyday, sugarcane was not only a cash crop but also a crop that enriches many farmers. Experiencing fluctuations in economic integration, sugarcane farming is no longer as lucrative as before compared to crops that directly compete with it, such as cassava, rice, and coffee. Therefore, farmers cannot help hesitating about the short-term returns of these crops.

According to the analysis of some experts, the process of urbanization is seriously threatening the sugarcane material area. Only in 10 years from 2009 to 2019, the urbanization rate in Vietnam rose from 29.76 percent to 36.6 percent. In Dong Nai Province alone, it is expected that by 2025 the urbanization rate will hit 50 percent, the sugarcane growing districts are being planned to become Grade 4 and 5 urban areas. Rapid urbanization threatens seriously the raw material area as these are districts with large sugarcane areas. Besides, only from 2015 to 2018, the proportion of laborers in the agricultural sector dropped by 6.3 percent, from 44 percent to 37.7 percent.

Statistics of the sugar industry show that more than 50 percent of sugarcane farmers are over 50 years old. Only 7 percent of sugarcane farmers are at the ages of 20-30 and 14 percent are at the ages of 30-40. These are talking numbers of the sugarcane industry and agricultural sector in general. The shift in labor structure from agriculture to industry and services and from rural to urban areas has caused the sugar industry to lack a successor generation. The situation in many raw material areas is that veterans grow sugarcane "for passion", whereas newbies are not interested, resulting in an increasingly narrowing growing area of sugarcane.

Sugar factories are "drown on land"

As a vicious cycle, many sugar refineries have had to close, which means that the raw material areas there are broken, and thousands of farmers are struggling due to the loss of livelihoods from sugarcane. According to reports of sugar refineries, in the 2019-2020 crop, the number of operating sugar factories was only 29. Up to now, in the 2020-2021 crop, only 26 factories are still in operation, because of a shortage of raw materials to maintain full capacity.

Sugarcane output is not enough for sugar refineries to operate efficiently. Many factories even had to close because they cannot run below capacity. Currently, the demand for sugar in Vietnam is about 2 million tons, and it is forecasted that this demand will surge to 2.5 million tons by 2025. The demand increases but supply cannot meet it. It is forecast that domestic sugarcane production this year will be short of 1-1.3 million tons of sugar.

Amid this fact, the unanswered questions for the sugar industry are how to rebuild the confidence of sugarcane growers and how to make both farmers and sugar refineries profitable and sugarcane develop again? These are the questions not only for enterprises and farmers but also for relevant parties, including the State, local authorities, and associations. Before the government has policies to revive the raw material area and restore the sugar industry, there is a risk that smuggled sugar will pour heavily into the country. When the problem of the redevelopment of the raw material area still encounters challenges and needs more time, and ensuring the supply of sugar for the domestic market requires ministries and agencies, especially the Ministry of Industry and Trade, to have radical and immediate solutions to stabilize the market.