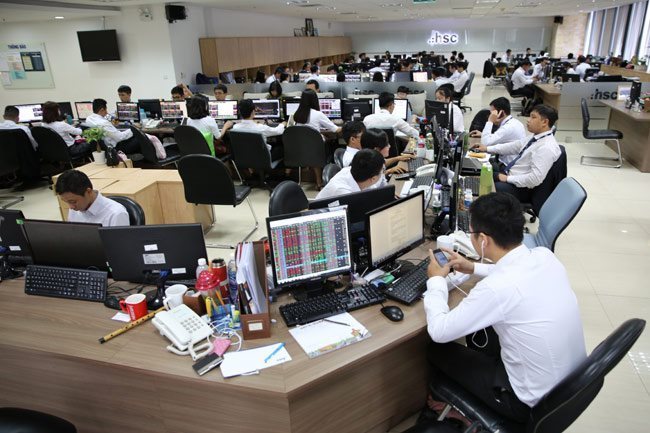 HCMC – Many stocks lost ground due to heavy selling pressure, prompting the VN-Index of the Hochiminh Stock Exchange to retreat 7.66 points to 1,258.7 today, May 17, after rising in the previous session.

At the close, the benchmark index fell by 0.6% from the session earlier, with losing stocks outnumbering winning ones by 278 to 141. Trade volume totaled some 758 million shares worth VND22.8 trillion, up 3% in both volume and value against the previous session. Some 52.5 million shares valued at VND2 trillion were traded in block deals.

In the VN30 basket, only eight stocks were in positive territory, rising by 1%-3.6% each at the close.

Under strong profit-taking pressure, many bank stocks such as VCB, BID, CTG, TCB, STB, VIB, LPB and MBB finished the day down, contributing to the decline of the main index.

Lender STB was the most actively traded stock on the southern bourse with 39.7 million shares changing hands.

Other largecaps such as insurer BVH, gas firm GAS, property developer VIC, consumer goods company MSN and dairy firm VNM were among key drags of the southern market, dipping by 1%-3.6%.

On the Hanoi Stock Exchange, the HNX-Index continued its upward spiral and closed the day up 0.7% from the session earlier at 296.79 points, backed by the gain of many large-cap stocks.

Closing the day, lender SHB jumped by 3.8% and took the lead on the northern bourse by liquidity with a matching volume of 95 million shares.