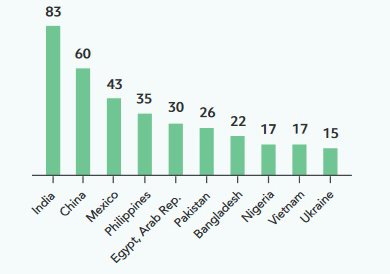 Data of the World Bank and the Global Knowledge Partnership on Migration and Development showed that Vietnam was the ninth biggest remittance beneficiary in the world in 2020 – PHOTO: COURTESY OF WORLD BANK

HCMC - Vietnamese living abroad sent home US$17.2 billion last year, a year-on-year increase of 3%, making Vietnam the world’s ninth biggest remittance beneficiary, according to a joint report of the World Bank and the Global Knowledge Partnership on Migration and Development.

The figure was higher than the World Bank’s earlier estimate of US$15.68 billion. In the East Asia and Pacific region, Vietnam was the third biggest remittance beneficiary after China and the Philippines.

The remittances in 2020 were equivalent to 5% of the country’s gross domestic product (GDP), falling from 6.5% in 2019, the “Covid-19 Crisis through a Migration Lens” report showed. However, the country was still among the top 10 recipients in terms of the share of remittances in GDP last year.

In 2020, in current U.S. dollar terms, the top five remittance recipient countries were India with some US$83 billion, China with US$60 billion, Mexico with US$43 billion, the Philippines with US$35 billion and Egypt with US$30 billion. India has been the largest recipient of remittances since 2008.

As a share of GDP, by contrast, the top five recipients in 2020 were the smaller economies: Tonga, Somalia, Lebanon, Kyrgyz Republic and South Sudan.

The United States was the largest source country for remittances in 2020, followed by the United Arab Emirates, Saudi Arabia and Russia.

Defying predictions, remittance flows have proved to be resilient during the Covid-19 crisis, the report said. In 2020, the officially recorded remittance flows to low- and middle-income countries reached US$540 billion, only 1.6% below the US$548 billion seen in 2019.

Foremost among the drivers of remittance flows and reasons behind their resilience during the crisis was the desire of migrants to help their families, to send money home by cutting consumption or drawing on savings, according to the World Bank.

Other drivers included fiscal stimulus in host countries that resulted in better-than-expected economic performance, a shift in flows from informal to formal channels and cyclical movements in oil prices and currency exchange rates.

The World Bank expected remittance flows to low- and middle-income countries to increase by 2.6% to US$553 billion in 2021 and by 2.2% to US$565 billion in 2022. Remittances are expected to grow twice as fast in Latin America and the Caribbean and in South Asia, but they are expected to decline further in Europe and Central Asia and remain sluggish in Sub-Saharan Africa.