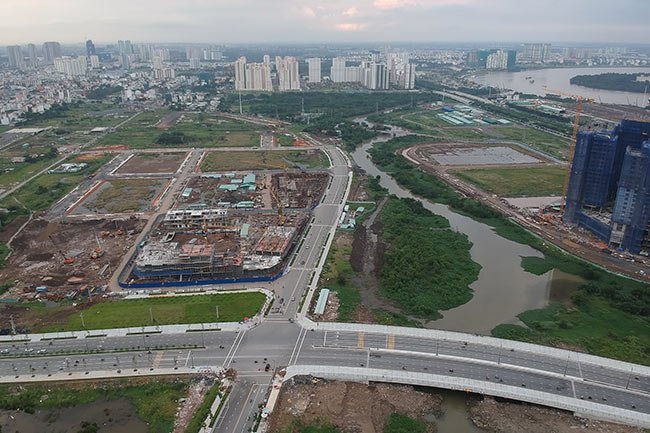 An aerial view of the Thu Thiem New Urban Area development project in HCMC’s Thu Duc City. HCMC will put up for auction the rights to use four land lots and 3,790 resettlement apartments in Thu Thiem– PHOTO: THANH HOA

HCMC – HCMC will put up for auction the rights to use four land lots and 3,790 resettlement apartments in the Thu Thiem New Urban Area in Thu Duc City in mid-June.

Among the four land lots in functional zones No. 3 and 4 covering a total of over 30,000 square meters, three will be used to develop a residential and commercial-service complex for a period of 50 years. Meanwhile, the remaining one which covers an area of some 8,570 square meters will also be used for 50 years for a residential block.

The municipal Department of Natural Resources and Environment was assigned to complete the auction paperwork prior to May 15 and bidding procedures for the four land lots before June 10.

As for the 3,790 resettlement apartments in Binh Khanh Ward, the department was also tasked with finishing the bidding paperwork and submitting it to the municipal government for approval prior to May 20 and completing auction procedures before June 15.

HCMC had earlier held three auctions for 3,790 resettlement apartments in Thu Thiem, but the auctions were a failure as it had no participants.